Guard Dog Molly to the Rescue 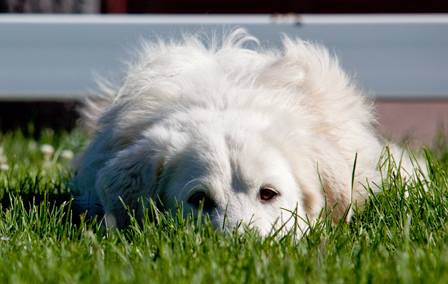 Lona, or as her friends called her “Old Lona”, lived alone deep in the Central Oregon desert with her cattle, range horses and beloved guard dog Molly. Five feet tall and barely outweighing a hundred pound sack of chicken feed, she’d been described as being no bigger than a bar of soap.

On this night, Lona was worried.

One of her young cows had calved late and was hanging around her house rather than with the herd. In this predator-filled country, that’s not always the safest place for a beginner mama and her brand new calf. Lona checked on the new mother regularly.

After about a week, the heifer was a no-show. Evening came, still nothing.

“Oh well,” Lona told herself, “I guess she’ll be OK.” But in the middle of that lovely summer night, she couldn’t stand it anymore. Clad only in a T-shirt and underwear, she climbed out of bed, grabbed a flashlight and went looking for them. Her dog Molly, who outweighed her, left her bed near the lilacs and trotted along behind.

About an hour into the search, Lona edged around a brush pile, tripped on a tangle of old barbwire and fell onto a rock pile. Though not seriously injured, she badly bruised her gimpy shoulder and couldn’t get up.

Molly raced to the scene, placed her great hairy body crosswise in front of Lona and looked back expectantly.

Assuming Molly wanted to play, Lona pushed the dog away with, “I don’t have time for this.”

With her energy flagging, thoughts of being partially clad, injured and alone in the desert began to seep into Lona’s mind. Resting for a few moments, her hand lingered on the dog’s shoulders. Molly once again spread her front feet and braced herself. Finally, Lona understood what Molly was doing.

Using the dog’s rigid shoulders, Lona leaned, wriggled and squirmed into a kneeling position. A short while later, still using the dog as a crutch, she rose creakingly to her feet. Slowly, with Molly walking by her injured side, the pair tottered home.

After giving the dog a one-armed, heart-felt hug, Lona fixed herself a hot cup of tea and sat in her favorite rocker. Before long, she drifted into a much-needed sleep.

When first light pinked her window, Lona awoke. Then, wobbling across the living room floor, she opened the front door. The heifer and her healthy calf were staring at the house and loyal Molly was still snoozing in the lilacs.

Bing Bingham is a writer, rancher and storyteller. If you’re interested in more stories from the American West, visit http://dustydogcafe.com/