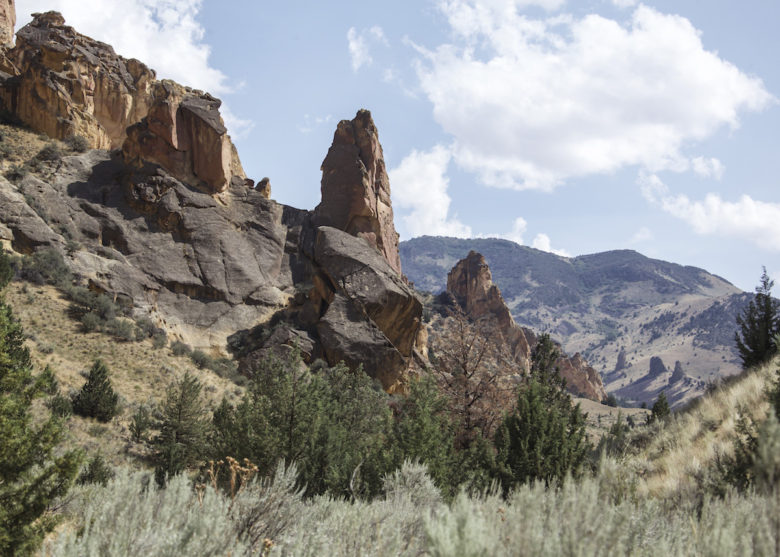 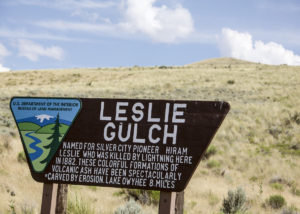 Arnie, my alter ego, wanted to show me Leslie Gulch . . . or what was left of the 15-million-year old eruptions after centuries of wind, rain and ice erosions had done their work. He was driving.

The day was hot and dry . . . the kind day a couple of erupting volcanoes might have enjoyed those eons ago. To our car scooting along the ribbon of scorching asphalt, the eruptions may as well have been yesterday. Heat waves radiating from the black pavement told us so. It was hot . . . very hot! I was glad for air-conditioning. 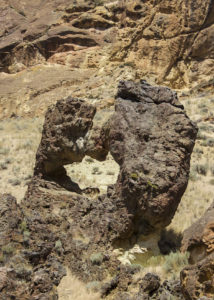 Leslie Gulch is located in the southeastern corner of Oregon. Getting there takes time. Without much visual interest, the sagebrush and brown grass-covered terrain stretched for miles in all directions. I dozed between sightings of clusters of boulders and the greenish patches of grass in shallow valleys that testified there was water somewhere in this desert.

“Oregon is full of volcanic mountains,” I said as Arnie throttled the Honda over a straight stretch of highway converging at the horizon. “What’s so special about Leslie Gulch?”

Hours later we left Highway 95 and had traversed 15 miles over the gravel road that led to the gulch. Centuries of erosion had etched away smaller rocks and loose soil leaving huge stone outcroppings on both sides of a valley. 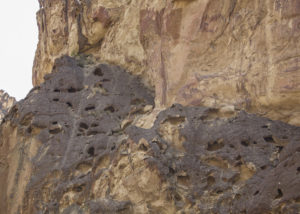 “Well . . . parts of the Grand Canyon,” I said attempting to recover a touch of credibility. “Or Arches,” I continued astonished that Oregon was home to such a wonder as this.

“Just wait,” Arnie cautioned as the car continued to creep along in the loose gravel. “See if you can spot the images of spirits that haunt the place.”

Sure enough, I began to see faces in the boulders on either side of the road.

“A phantom of the desert opera,” I agreed, chuckling at my clever allusion.

“I think it’s a masquerade,” Arnie added. “Revelers gathered . . . awaiting the full moon to give atmosphere to their charade.” 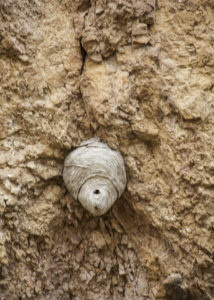 “Don’t’ get too close,” Arnie cautioned.

“Didn’t you see that sign back there . . . don’t enter the gulch when there’s a chance of rain. Apparently, flashfloods come avalanching down in an instant . . . and the sign says there is no way out.”

“Not a problem today,” Arnie noted gesturing at the nearly clear blue sky.

“Gotta watch out for lightning too,” I said. “Sign says Hiram Leslie was struck and killed by lightning while working in the gulch . . . that’s how the gulch got its name.”

“Wouldn’t want to get something named after me that way . . .,” Arnie said continuing to nose the car along the gulch floor.

The consolidated volcanic ash tufts, left not only images of masked spirits we were seeing everywhere, but obelisks jutted out from the sides of the cliffs as well as from the valley floor. 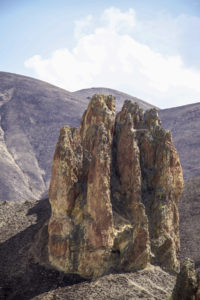 “Leslie Gulch was good choice, Arnie,” I said expressing my appreciation to him for our interesting outing . . . more like an adventure.

Arnie grunted his satisfaction at having pleased me.