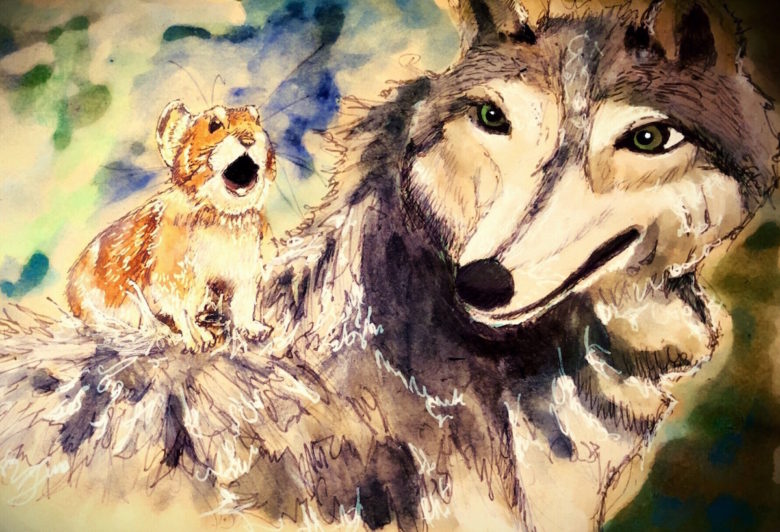 Snap spent the next several days hiking the elk and deer trails that transverse the Blue Mountains of Wallowa County.

Every night before falling asleep he squatted before his chosen resting place, stuck his nose in the air, and emitted a mournful howl. Ordinarily, a wolf traveling alone avoids howling for fear he will alert an alien pack of wolves and invite attack. But Snap was too lonely.

After each howl he sat motionless, straining his sensitive ears in hopes of being rewarded by an answering wolf howl. So far his attempts were met with silence.

Snap hadn’t traveled two miles in the new direction when he encountered an American pika harvesting hay among the large chunks of basalt that covered the mountainside.

The fuzzy creature didn’t notice him. Snap quietly settled on his haunches and observed.

“Dum de dum… de-diddle de dum,” the wooly animal sang as she scurried carrying tufts of yellow straw in and out of a hole near a large boulder.

Snap admired her energy and the intimate little song she sang.

‘A lot of work with little results,’ he thought. ‘I could scout up five years worth of fodder in a fraction of the time it takes that little thing to gather one.’

When the pika disappeared with a mouth full of hay, Snap stirred up a bundle and scooted it toward the cave entrance and settled behind a large rock to see what she would do when she discovered the gift.

The pika scurried out of the hole past Snap’s haystack toward the harvest field. Suddenly, she stopped.

She looked back at the bonanza of straw, and then around to see what had brought it… she only saw rocks and meager stands of bluebunch wheatgrass, a few hardy flowers, and sagebrush struggling to hold onto life.

Scurrying back to the pile of straw, she gathered a mouth full, and disappeared into her underground silo.

Snap pushed another collection of dried grass near the entrance and again hid behind the rock. Shortly, the pika reappeared. This time she stopped at the pile of straw sniffed it. Frightened, she quickly ran back into the opening and disappeared.

Within seconds her face appeared… looking to see what was doing her work.

“A funny way to spend your days,” Snap said stepping out from behind the rock.

“I was just trying to help you do whatever it is you are doing.”

“Gather weeds to put in your hole.”

“Never seen anything like you before. What are you doing here?”

“Well, you won’t see any around here,” the pika snapped and then, in softer tones added, “as far as I know.”

“I won’t keep you from your food harvest, I’ll be on my way.”

“Which way you going?”

“Can I hitch a ride? There’s a pack of pika living down in the canyon… takes me forever to get there… short legs,” the pika said.

“Roxanne,” the pika said scurrying onto a rock and then onto Snap’s back.

Roxanne gripped the hair on the back of Snap’s neck with her mouth and held on.

“I get it,” Snap said, and entering the shade of a stand of pole trees added, “You’ll never guess what wolves eat.”

Snap laughed sensing that Roxanne might have figured it out. “You don’t need to worry…. I’ll not eat you… prefer bigger stuff. And besides you’re cute.”

Though Roxanne couldn’t talk, Snap was glad she hitched a ride. Small companionship was better than no companionship at all. They dropped down a couple thousand feet into a stand of spruce.

Snap stopped. “I didn’t get that. Actually, didn’t get anything you’ve said.”

“This is where I get off,” Roxanne said hopping off Snap’s back onto a bed of needles.

“You sure? Didn’t mean to scare you… you’re safe with me,” the young wolf reassured.

“I’m glad for that… you did give me a start. But no… I’m getting off because we’re here… hay-stacker relatives. Thanks for the ride!” she said and scampered off into the green understory.