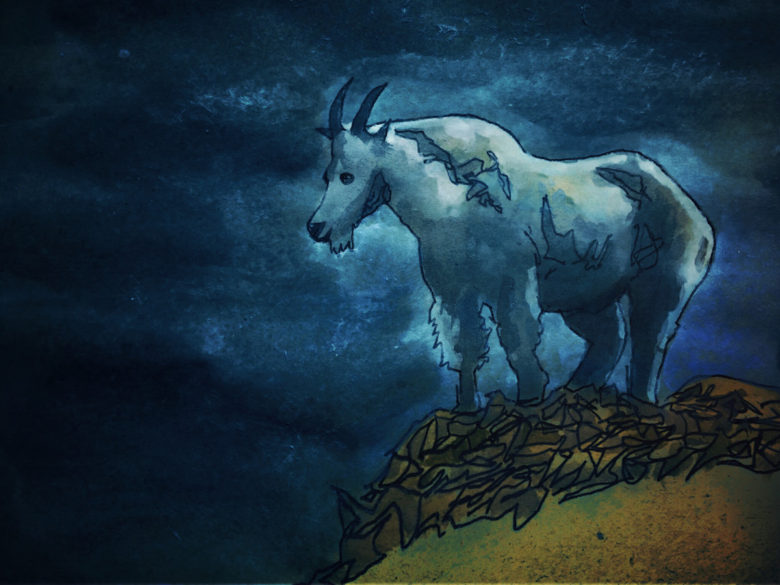 The early morning sun pried Snap from sleep. He stretched his legs, yawned and trotted to the remnants of the fallen deer. After satisfying his hunger, he drank water from a pocket honed in a large rock and galloped west over the bare ground of the mountain ridge.

Creeks and rivers were refreshing and necessary, but Snap preferred to travel the crests of buttes. Standing on the edge of a bluff with an unobstructed view in all directions made him feel . . . almost . . . like an alpha.

‘And I will be, when I find a mate,’ he thought prancing like the thoroughbred Appaloosa he’d seen dancing in the meadows of the Salmon River in Idaho.

Then, almost unknowingly, he found himself carefully inching his way along a jagged ledge etched into the southern face of the mountain. On his right were granite walls reaching into the sky above him, and on his left below were tons of loose rock. One slip and he would tumble hundreds of feet down the treacherous surface.

He wished he’d chosen a different route, but never having traveled this way before, he didn’t know. Trampled tufts of grass and well-placed rocks were evidence that other animals also used the ledge to negotiate the dangerous terrain.

He heard a click. He looked toward the sound not knowing what to expect. There above him was a mountain goat. It had sharp horns . . . no doubt to use as a weapon when needed.

It appeared to Snap that the goat was in a precarious position also. One of its hind hoofs was gripping a buried rock and the other stretched toward a narrow indentation in the stone wall.The skilled mountain climber was attempting to move from one dangerous situation to another.

Ordinarily, Snap had no reason to fear a goat. He had seen mountain goats in Idaho. His pack had brought down more than one. On flat ground goats are no match for wolves. But in the mountains . . .

This goat wasn’t afraid of Snap either. In his element on rocky mountainsides no predator can touch a skilled mountain climber like himself. In the lowlands, bobcats, lions, coyotes, and bears prey on mountain goats, but not in the alpine.

But, he had never seen an animal like this one, and didn’t know what to think.

“I’m not a coyote,” Snap said, a bit uneasy. He knew that it wouldn’t take much for the goat to catch him with a horn and send him hurtling to his death on the rocks below.

If the goat made that choice, Snap would defend himself the best he could . . . he’d take the goat with him if it came to a fight. He waited for the goat to respond.

After a few moments it was apparent that he and the goat were at an impasse.

“I’m a wolf,” Snap said breaking the silence. “I came from the mountains east of here.”

“Why?” Snap asked taking a careful step along the ledge toward a large boulder clinging to the cliff’s southern face.

“Don’t know,” the goat answered, “We’re here in the Wallowa’s . . . that’s all I know . . . we’ve always been here . . . gets easier on the other side,” the goat said moving above and out of sight.”
Snap looked up. there was no sign of the goat. “I have to go back,” Snap called. He backed up to a place where he thought he might turn around.

The goat re-appeared. “Climb up here. It’ll be easy going for you.” He paused and surveyed the plateau on which he stood and added, “ . . . at least for a while.”

Snap looked down. A fall to the rocks below would be fatal. He couldn’t go back the way he came. “If I come up . . . you won’t butt me o the cliff . . . will you?”
“I won’t if you promise not to eat me,” the goat answered.
“Eat you?” Snap asked perplexed. In his predicament, eating was the last thing on his mind.
Then, he realized that the goat’s own sense of self-preservation was what made him cautious. And he recognized that the goat was right to be fearful . . . eating cloven hooved creatures is what wolves do when they are hungry.

Though the goat had never seen a wolf, he was wise to be cautious.

“Eat you . . . I won’t!” Snap reassured and began making his way up the steep grade and onto the at surface on top.

The goat backed away, uncertain the wolf would keep his word.

“Don’t worry, we don’t need to fight,” Snap said taking an easy step toward him. “We can be friends, can’t we? My name is Snap, what’s yours?”

The goat seemed to relax . . . but kept a reasonable distance between himself and the wolf. He wagged his head up and down. His long goatee moved to its rhythm.

“Snap. I’ve never seen anything like you. What are you doing here where you don’t belong?”

“I had to leave my pack in the Imnaha . . . Cayuse Meadow to be exact,” Snap answered.

Nibbling a sprig of sage he added, “there are three high peaks to roam on.” He pointed south. “A little way beyond Granite Mountain over there is Pine Lake. It’s the best. You’d like it here.”

The new acquaintances carefully made their way down the south face of Red Mountain to a grove of bull pine and settled down for the night. Snap fell asleep thinking,

Snap Wolf’s Journey to Find a Mate is available on Amazon.com


Astoria – Relics Along the Waterfront