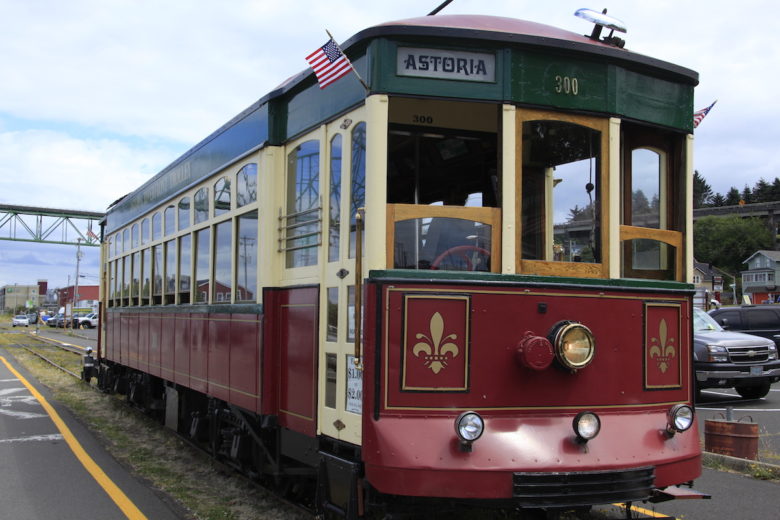 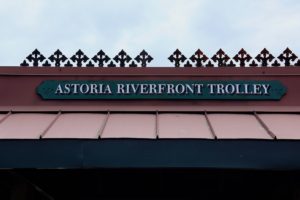 Every city with any kind of an ego goes to some length to promote memorable experiences for visitors as well as for its own people. Astoria, Oregon is no exception. One of this historic city’s most colorful attractions is the Riverfront Trolley.

Hop on the vintage vehicle at any well marked trolley shelter and you are on your way. Cross the conductor’s palm with two bucks and you can hop on and off all 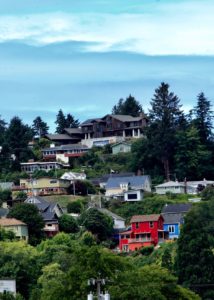 day (or at least from noon to 6pm). The round-trip from west to east takes about one hour.

Arnie, my alter ego, and I boarded at the western exxtremety of the line near the Riverwalk Inn. The volunteer engineer and conductor were both dressed in 1920s uniforms. The conductor, an older fellow about our age, assumed the posture of the seasoned trainman. He bantered with riders about what we were seeing along the way and used every excuse to reach for the cord and pull it, sending a clanging sound in all directions.

“I hoped he isn’t’ trying to compete with the bell ringers of San Francisco,” Arnie said.

“Look at that,” I said ignoring Arnie’s comment and pointing up the hill. “I’d say Astorians like living in houses that cling to the mountain.” 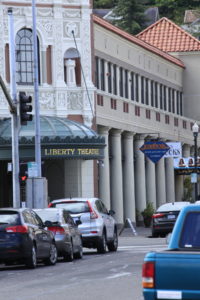 “Yep,” the conductor quipped, no doubt wondering why I called attention to the obvious.

“At least everyone gets a view,” Arnie responded, “Sure hope their emergency brakes are good.”

Glancing up a street in the downtown area, an attractive building caught my eye, the Liberty Theatre. Opened in 1926, the 20’s style edifice is listed on the National Register of Historic Places and was recently named “Best Historic Venue in Oregon.”

We rattled past weathered fish canneries converted into restaurants and knick-knack stores. Sea gulls were sitting or standing on perches as if they owned their world . . . and in away they do . . . their ancestors earned squatter’s rights a long time ago. 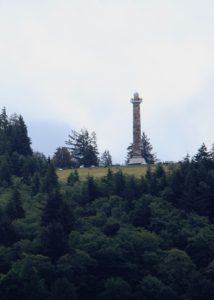 “That’s the Astoria Column, isn’t it?” Arnie asked pointing at the monolith at the top of Coxcomb Hill.

There it was, silhouetted clear again the sky. Arnie was right.

As the car eased to a stop at the eastern end of the tracks, Arnie observed, “Do we have to ride backwards on our way back?”

Just then, the conductor told us to get out of our seats, reach down, grab the seat and pull. As requested, we lifted the seat and, to our wondering eyes, the seat turned to the back and what had been the back became the seat. We sat back down and with a twisting of the crank that controls the clutch, the trolley gave a gentle lurch. We were on our way back to the city center and eventually back to the Riverwalk shelter. 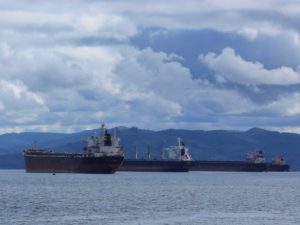 Arnie pointed out the window to our right. There in the middle of the Columbia River near the Astoria-Megler Bridge, floated a number of huge anchored cargo ships waiting their turn to do something . . . likely loading or unloading cargo.

“That bridge sure is the eye-catcher that dominates this city,” Arnie said. “I think people should visit. They’ll like it.”

For a virtual ride on the trolly, visit https://www.youtube.com/watch?v=2DPEIIlAIzM

Stories by Morris R. Pike are available on Amazon.com