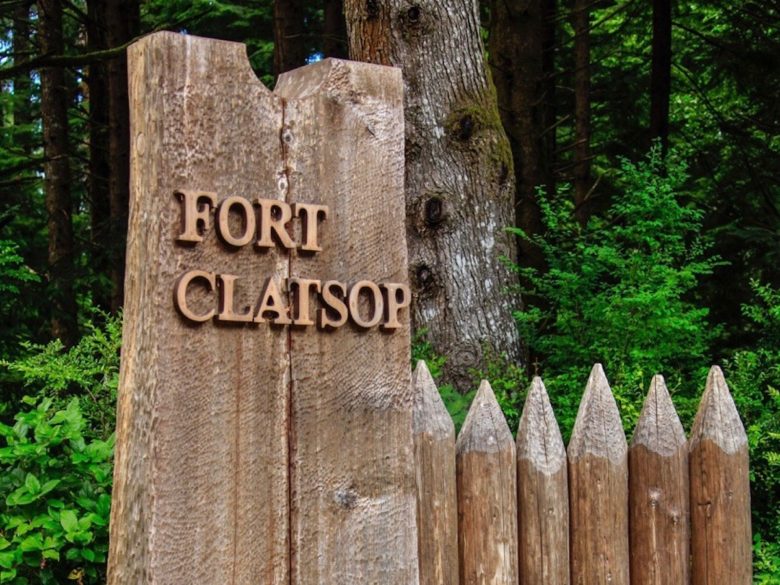 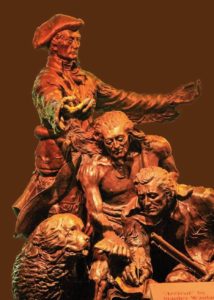 I parked the car. My imaginary companion Arnie and I headed into the forest.

“Doesn’t look like there any Walmarts around here,” Arnie joked.

It was a dumb thing for him to say so I ignored the comment.

But Arnie was right. The park, which holds the replica of the fort Lewis and Clark built on the banks of what we call the Lewis and Clark River (Indians called it the Natul), is deliberately kept primitive. It looks similar to the way it would have been when the famous men explored the area in 1805-1806.

The Forest Service provides year-round ranger tours in the park… rain or shine and it rains more than it shines. A damp bone-penetrating chill hung in the air like a ghostly fog.

“They had to want to be here pretty bad to put up with this,” Arnie griped gesturing toward the thick understory. 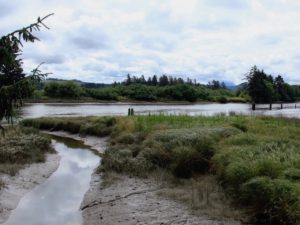 Our cute ranger guide selected six or so of us learners and headed down the needle-padded path toward the river. We stopped periodically to listen to expert data concerning the foliage crowding the park.

“And that’s Oregon Grape,” she said of another.

“Looks more like holly to me,” Arnie said under his breath.

“Listen and you’ll learn something,” I chastised in a whisper not wanting to call attention to my invisible companion.

“More than 250 species of vascular plants and 74 of mosses and liverworts thrive here, a good many if which you’ll see along this trail,” the ranger said, “but most are represented in the park herbarium.”

“Vascular… Does that include the trees?” I asked. 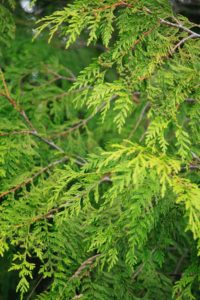 “Good question.” She paused, “Yes, vascular plants do include conifers,” She paused again, then, plunged on clicking through plant names as if we all had phonographic memories, “The trees you’ll see along this trail are Sitka spruce, Western hemlock, Western red cedar, Douglas fir, red alder and several willows plus all the plants you see growing in the understory. The moist, temperate maritime climate and deep, humus-rich soils create ideal growing conditions for conifer trees, which result in forests of lush biodiversity, and trees of massive size.

By now we had reached the river.

“The explorers used this landing spot to launch canoes in search of game and travel to visit Indian villages to barter for food and other trinkets,” our ranger said.

Cattails, reeds and other water loving plants grace the banks of the river providing beauty to the shoreline and habitat for birds and small animals.

The ranger concluded her tour and freed us to wander on our own. Arnie and I returned to the visitor center. We wanted to head to Warrenton before dark to visit the Peter Iredale shipwreck. 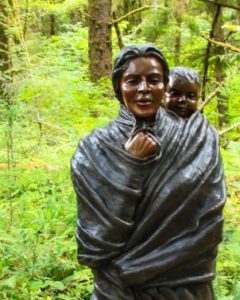 Outside the center stood a bronze statue of Sacajawea, the Indian woman who served as a guide for Lewis and Clark on their journey to the west coast.

“Not yet, what?” I asked turning to face him.

“No, really… she said we must see the fort before we leave.”

Arnie looked at Sacajawea as if listening.

“Okay,” I said still skeptical and wondering how Arnie knew the papoose’s name.

“Okay, okay… so you and the Indian maid talk,” I conceded looking at my watch. “Tell her we’ll return to see the fort, but not today. We gotta get to the Peter Iredale and back to the hotel before dark. Tell her we’ll be back.”

“You heard him,” Arnie said pointing a thumb in my direction, “We’ll be back.” As we rounded the corner headed for the parking lot, Arnie turned to Sacajawea and shouted. “Cute kid.”

I was glad no one was watching.

Morris R. Pike’s stories for children on up are available on Amazon.com