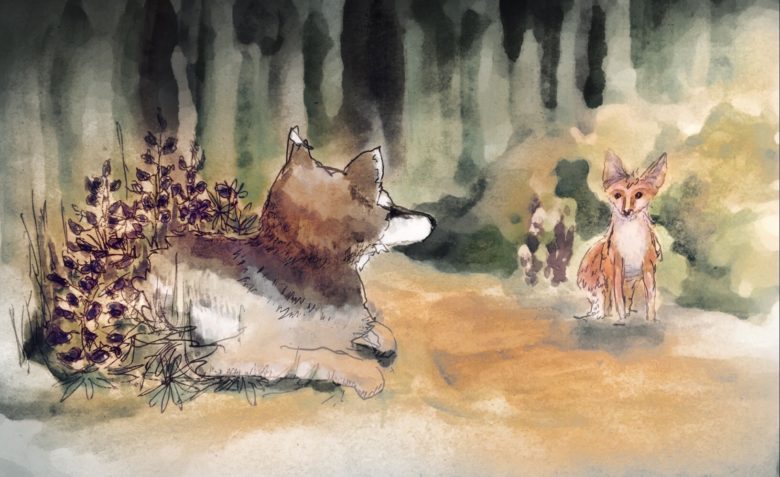 The faint glow of morning appeared over the jagged crest of the mountains east of Cayuse Meadow. Snap lifted himself to a standing position and surveyed his sleeping family. He was starting a journey . . . a journey to fulfill an ancient urge that gnaws at all male wolves.

Throughout the day, he followed faint animal trails paralleling the Imnaha River. He wasn’t in a hurry, but he did want to be far enough away that there was little likelihood that Alpha or any of his brothers would come after him.

He was glad that the bird’s singing was the only sound that broke the silence in the forest. He liked birds . . . their songs were company.

Circling vultures told him that carrion was near. A deer may have fallen off a bluff and died. He trotted toward them. After eating his fill, he found a patch of lupine, nessed it into a suitable bed and lay down.

Suddenly, he heard a rustling nearby. Nerves alerted and muscles tensed, Snap was ready to defend himself. He was surprised to see a red fox creeping into his space.

The fox looked up at him and froze. She had never seen anything like him before.

“Looking for a wolf mate . . . You seen any wolves around here?”

“Never seen one before . . . ” Amber answered timidly, letting her guard down a bit. “You’re big,” she managed to add.

You wouldn’t hurt us foxes, would you?”
“Not unless you give me cause,” Snap answered.

“Whip a cougar? Done it before,” Snap answered confidently.

Snap watched her go. “Pretty fox.”
As the setting sun glowed in the west, Snap gazed at the silhouette of the black mountains. He had done it. He’d left the security of his powerful father’s pack. A shudder gripped his body. He was alone now. As cute as the fox was . . . foxes would not do. He had to search until he could find a mate. He had to become the alpha of his own pack.

In the distance Snap could hear a mournful howl. It was his mother’s voice calling for him.

He stirred, tempted to run to her. He trotted a hundred yards or so in the direction of the beckoning call. He stopped. ‘No!’ He’d answered an ancient urge . . . it compelled him to set his feet into the unknown. He did not answer the howl but returned to his bed and settled down.

A Diary of Snap Wolf’s Journey to Find a Mate is available both in paperback and Kindle at Amazon.com

Together in the Cemetery