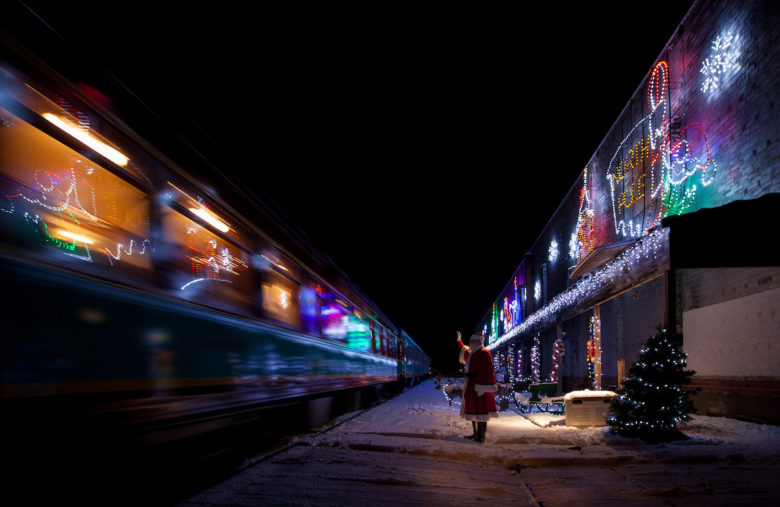 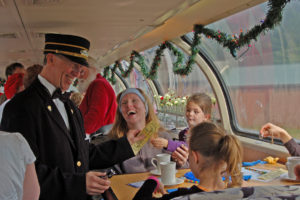 Christmas is coming and on November 12th, the Mt. Hood Railroad is rolling out THE POLAR EXPRESS™ Train Ride to get ready for it. Nothing gets you (all ages) in the holiday season mood than this annual tradition – starts in downtown Hood River, heads up toward the mountain and its all magic from there. Here’s what the good folks have to say:

Hood River, OR –  The Mount Hood Railroad is making the holidays a little more merry and bright on THE POLAR EXPRESS™ Train Ride, beginning service Nov. 12, 2016. The magical story comes to life when the train departs Hood River for a one hour round-trip to the North Pole. Guests will be treated to a number of improvements including sparkling clean rail cars; new windows to provide better views; a larger, brighter Santa’s workshop set at the North Pole; enhanced decorations at the train depot; and comfortable, tented waiting areas prior to boarding. 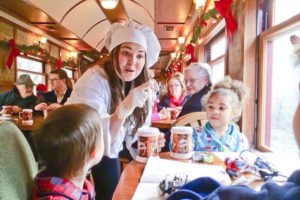 Set to the sounds of the motion picture soundtrack, passengers will relive the magic of the story as they are whisked away on THE POLAR EXPRESS™ Train Ride. Once onboard, cheerful, dancing chefs serve passengers hot chocolate and cookies while they read along with the classic children’s book, The Polar Express, by Chris Van Allsburg. Santa and his helpers greet passengers at the North Pole and then board the train, where each child is given the first gift of Christmas – a silver sleigh bell. Chefs aboard each car lead passengers in singing Christmas carols on the ride back to Hood River.

The journey begins November 12 and runs through December 23 on select dates, with departure times at 11:30 a.m., 2 p.m., 4:30 p.m. and 7 p.m. Exact dates, fares and excursion times are available by visiting https://www.mthoodrr.com/the-polar-express-train-ride/ or calling 800-872-4661. Ticket prices range from $31 to $71 depending on class of service and date of travel. Families are encouraged to wear their pajamas for the ride. 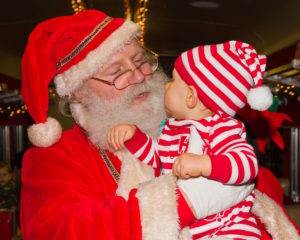 THE POLAR EXPRESS and all related characters and elements are trademarks of and © Warner Bros. Entertainment Inc. Based on THE POLAR EXPRESS book and characters TM & © 1985 by Chris Van Allsburg. Used by permission of Houghton Mifflin Company. All rights reserved.
(s16)

THE POLAR EXPRESS Film
The Academy Award winning team of Tom Hanks and director Robert Zemeckis reunite for THE POLAR EXPRESS, an inspiring adventure based on the beloved children’s book by Chris Van Allsburg.  When a doubting young boy takes an extraordinary train ride to the North Pole, he embarks on a journey of self-discovery that shows him that the wonder of life never fades for those who believe. Sony Pictures Imageworks and visual effects supervisor Ken Ralston, Oscar winners for their innovative work, help bring the story vividly to the screen in full CG animation through Imageworks’ next-generation motion capture process that allows live-action performances to drive the emotions and movements of the digital characters. Warner Home Video will once again offer THE POLAR EXPRESS in standard-definition, Blu-ray and 3D DVD versions this holiday season.

THE POLAR EXPRESS Book
THE POLAR EXPRESS film is based on Chris Van Allsburg’s classic Christmas picture book, which tells the story of a boy who takes a magical Christmas Eve train ride to the North Pole to receive a special gift from Santa. First published by Houghton Mifflin Company in 1985, The Polar Express became an instant family favorite and has sold more than 6 million copies worldwide. In 1986 it won the prestigious Caldecott Medal for Illustration.