About the Fleet of Flowers in Depoe Bay Oregon . . . 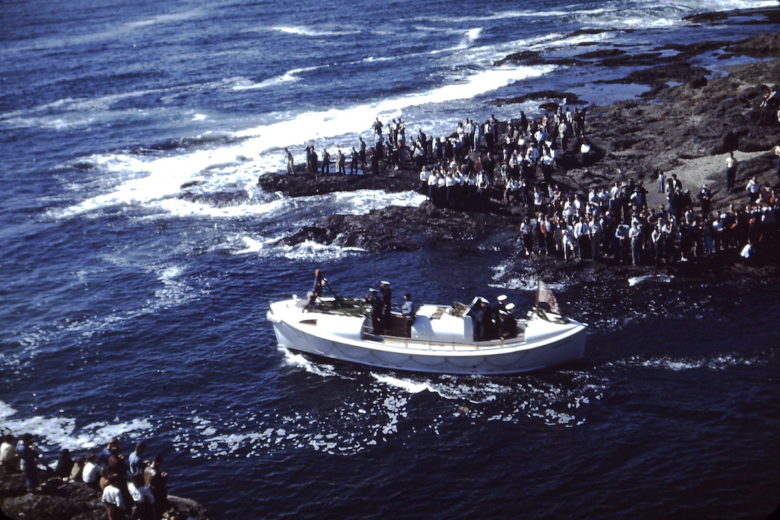 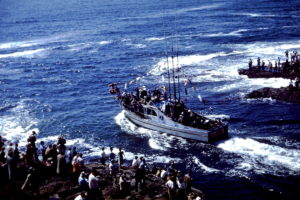 Fleet of Flowers, taken by Innah Fae Milburn in 1948; submitted by her great-granddaughter Sue Stutzman.

On Memorial Day, each year since 1945, Depoe Bay has hosted the Fleet of Flowers. The event was initiated to honor the memories of two fishermen, Roy Bower and John Chambers, who died at sea in an attempt to aid another fisherman.

Following an on-shore ceremony at Depoe Bay Harbor, the fleet of flower-laden boats pass under the Highway 101 bridge.

I didn’t become aware of the Fleet of Flowers until I started taking tour groups there in the mid-60s.  I had no idea people used to go down to the water because I didn’t go there before the sea wall was already in.

So, I had to do some research and here is what I found: 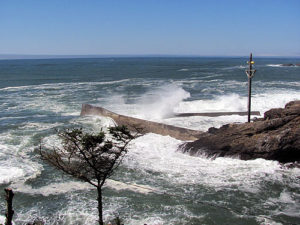 Photo of the Depoe Bay seawall taken sometime after 1952 (though I doubt there would have been many people standing down there on a surf day such as this one).

“In 1950, the harbor was closed for improvements which were completed by 1952. A cofferdam was constructed across the mouth of the channel to keep ocean waters out of the bay, and flumes rerouted water from North Depoe Bay Creek and South Depoe Bay Creek to the ocean. The water in the bay was pumped out and the harbor was enlarged to 750 feet long by 390 feet wide by eight feet deep, and the retaining seawall along the east side was constructed. Just before the project was completed, rough waters at high tide tore out the south side of the cotterdam, flooding the bay. However, all construction equipment had been removed from the bay floor, and there was little consequence to this potentially devastating event.”