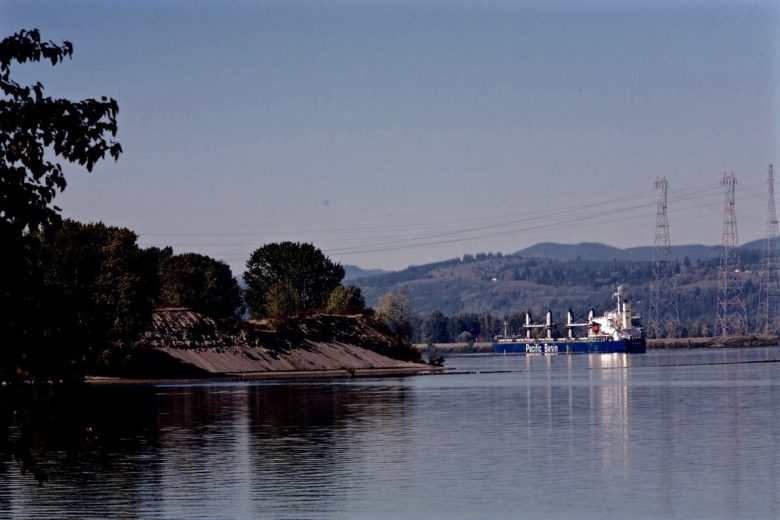 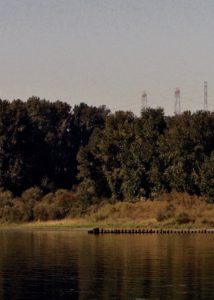 My best friend John and I joked about Slake Drives. We shouldn’t have, but we did. He was just too weird . . .  had a straggly, gray beard, wore faded overalls, and mumbled when he spoke. Everyone in town has heard him go on and on about the haunted island in the Columbia River about 6 miles downstream from our little town of Rainier, Oregon.

“The place is haunted,” he would say, then, go on to fill the listener with all sorts of nonsense about Indians once roaming the banks of the Columbia. “They still do,” he’d insist pointing west.

“Yeah, I taunted, “And you’re best friend is Mark Twain.”

Slake nibbled at his beard, sucked his teeth and waddled off mumbling, “I heard ‘m … war druummmms.”

John and I laughed about it.

Finally, one empty weekend after a Slake sighting, I said, “Hey John, let’s check out the island. Leroy’s got a twenty-footer we can borrow. Let’s go have a look.”

“And we might find some arrowheads . . . Where there’s Indians, there’s gotta be artifacts.”

“Don’t flood the engine,” Leroy (who was studying to become a riverboat pilot) cautioned as we finished putting our  gear into his outboard. “Y’ do and you may have a tricky time getting her started. Sometimes she’s temperamental.”

The strong river current took us quickly to Dibblee Island . . . named after the Dibblee family who ran a dairy farm on it. The two-and-a-half mile long island had been unoccupied for about 50 years.

“Nobody here but Indians.” John laughed as we anchored our boat to a leftover piece of piling sticking out of the sand.

We spent the day tromping through the thick brush that covered most of the island. We scanned the ground for arrowheads.

Several large cargo ships chugged up the river while others moved past us on their way to the river’s yawning mouth and out to sea.

In the late afternoon, John called, “Got something.” He held up a piece of belt and a rusty buckle.

“Left over from milking days, no doubt.” I said, stepping into a clearing near Leroy’s boat.

“Indian relics, sure! Slake Drives, you’re nuts!” I shouted into the distance. “No sign of Indians here.”

“Might as well fire up the Mercury and head for home,” John said, climbing into the outboard.

John set the choke and pulled the cord.

“Shouldn’t you let off the choke?” I asked sitting down.

It was dark when we finally gave up trying to get the motor started. We would have to spend the night and deal with our situation in the morning.

Fortunately, Leroy had stowed sleeping bags in the mid-boat storage bin. A brisk wind coming up river channel rustled the tree branches and bushes near our clearing. We settled into our bags; talked awhile. Then, fell silent waiting for sleep.

“You hear that?” John whispered waking me from slumber.

The wind agitating the leaves and branches made rasping sounds like distant voices.

Yes, I heard it . . . the regular beating of what sounded like a drum in the distance. “Indians,” I whispered unable to believe my ears.

The sound grew louder and the ground seemed to tremble with the footsteps of the dancers.

“Nothing we can do,” I whispered. “We stay quiet… maybe they won’t know we are here.”

We fell silent. The wind emitted angry growls … I couldn’t understand what the voices were saying… ‘Are they on the war path?’ I thought…. But didn’t dare say anything. Silence was our best defense.

My nerves tensed to the breaking point. I was sure that any moment tomahawk-toting warriors would break into the clearing and make short work of us defenseless palefaces.

Finally, exhaustion defeated my fear and I lapsed into a fitful, semi-conscious sleep. I don’t think John slept at all.

The next morning I was jolted out of slumber by the sound of the Mercury outboard motor sputtering to life and shortly we were headed up river to dock at the pier hugging the Columbia at Rainier.

Leroy met us there. “Almost sent out a rescue party to see what happened to you…”

John and I looked at one another.

“Well, we owe Slake Drives an apology,” I said and laughed.

“What time was that?” Leroy asked.

“Any ships go by?” Leroy wanted to know.

“Guess one or two,” John said.

Leroy began to laugh . . .  he walked away stomping his feet and laughing. He couldn’t stop.

Leroy could hardly speak, “You guys think Slake is strange…” He laughed again. “You’re right. You do owe Slake an apology…. All three of you are weird.”

John and I looked at one another bewildered.

Leroy explained, “The sounds you thought were war drums was the sound of the big cargo ship’s propeller churning through the water… propeller vibrations … excitation … or cavitation … or both. Those ships need maintenance …” he laughed again. He moved his boat into its birth and walked away laughing leaving John and I dumbfounded with sheepish grins on our faces.

And that was it…strong wind stirring the bushes… aging ship propellers, fertile imaginations … no Indians on the warpath.

Still . . .  John and I got a hair-raising adventure out of that trip to Dibblee Island.

Next time we saw Slake we entertained him with fantasies of our own.