When I asked Tu Rea if he had kept track of how far he had ridden on his bicycle, I wasn’t prepared to hear that he had  ridden 11,000 miles in the four years he had had it. A single parent with a 10-year-old boy and a full-time job as a slot machine attendant at Spirit Mountain Casino, he also swam a mile-and-a-half once a week and used an elliptical more than an hour a day. When time and energy permitted, he trained five to six times a week. While I called his regimen Herculean, he purported it to be just an act of an average Joe wannabe athlete keeping personal demons at bay with exercise.

Despite his love of bicycling, Tu’s priority was his son Max.

“Trading Max time for bike time is against my rules,” Tu said. “I try to be home by the time he gets home. On workdays when Max is in school, I won’t go much over 30 miles. On days off however, I often go between 50 and 90 miles. Once a year, I make arrangements for Max to go to his grandma’s so I have time to complete a 100-plus mile century ride.” 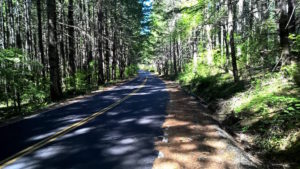 Tu had a history of taking exercise to the limit. Born and raised in Oregon, he started out swimming as a kid because of foot problems, swimming 300 to 400 laps at a time. Then it was backpacking several hundred miles in a summer. After that, it was jogging 10 to 15 miles at a time.

Tu lost a few years to drugs but after the fog began to lift, he started to exercise again. After walking three to eight miles up the steepest hills he could find tore up his joints, he switched to using a low impact elliptical bike almost every day. He wore out more than his fair share of home-use models, and while waiting for a commercial-grade replacement he discovered bicycling. 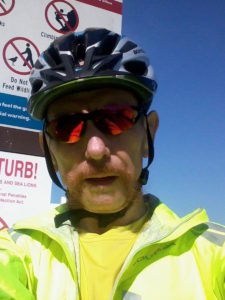 “I guess you could say I’m an exercise (endorphin) addict. As long as I exercise regularly, my head and mood stay decent. I’ve put together almost 10 years clean and sober now, and no longer take any kind of anti-depressants or other such medication. I do have meds for other physical issues, however, but my depression and anxiety is handled with exercise,” he explained.

Tu loved the solitude of biking the back roads and communing with nature.

He described his last century ride, the ride he looked forward to all year, this way: “Season’s highlight century ride. 104.69 miles. Ballston, Whiteson, McMinnville, Carlton, Meadowlake/Nestucca Rd, Bible Creek, Willamina Creek, out to OR #22 to Mill Creek and up to the park home via Harmony…