Tugboats on the Columbia River 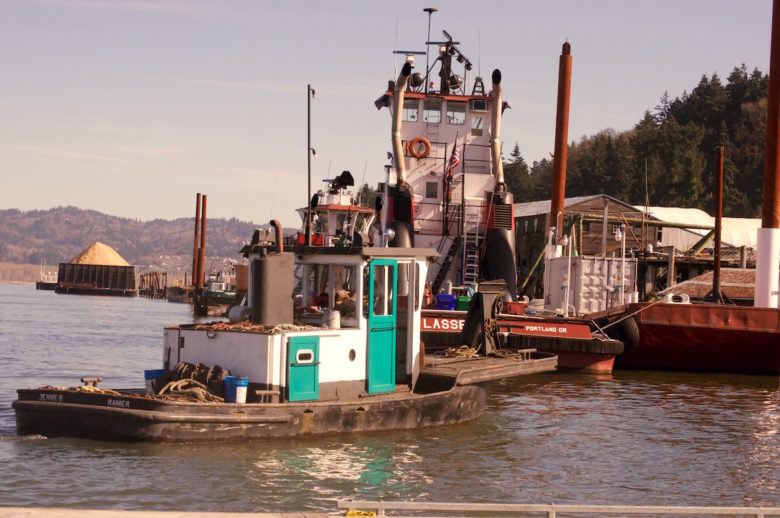 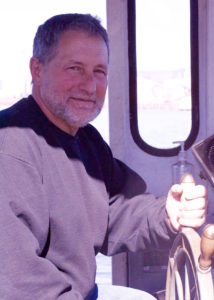 It takes a lot of people to help the Columbia River do its work. Micheal Brusco is one of those people. An independent tugboat owner/operator of Mebco Marine Tugboat Service, he builds, installs and maintains piers, salvages (including run-away logs), does light towing and anything else that needs to be done to keep his part of the river in working order. Following in his father’s footsteps, Brusco has been on the river since childhood and so far sees no reason to be anywhere else.

Born in 1957, in nearby Longview, Washington, Brusco never strayed too far away from the river on which he still spends most of his time. He was nine when he started spending his free time on the boat helping his dad. He remembers getting a new set of rain gear for Christmas when he was 11 and recalls saving the 25-cents an hour he got paid to buy himself a bicycle. Growing up on tugboats as he did, he easily talks of swifter lines, dogs and boom sticks.

“River work has changed a lot since I started,” Brusco said. “We used to service the logging town of Deep River, the settlement near Astoria built on pilings to accommodate the tides from the Columbia. From there, we pulled log rafts upriver to Camus, Wash., a few miles east of Vancouver. It usually took us three to four days because we could only sail on the two high tides a day. We rode the tide in for the eight hours it lasted, tied up and waited the eight hours it took to get another one and then start out again. There are no log rafts anymore because the logs are transported by truck, rail and merchant ship.”

Though the log raft business isn’t there any more, Brusco points out that the river still needs its tugboats and gives one of his many examples.

“The day Mt. St. Helens blew, we were sent up the Cowlitz to tie off the barges and bring them down to safety,” Brusco said. “It was dark, the debris in the river was so violent that we couldn’t control the tug. It pushed us sideways, and then as if a miracle happened we straightened out just before each of the three bridges we had to pass under. We were in the mudflow debris from the mountain – the same debris that filled the 40-foot shipping channel under the Longview Bridge to a depth of four-feet in a matter of hours. Fortunately we aren’t called on that often to that degree of rescue work but it does happen.”

While looking back to the days when the family hosted friends on the boat and went out fishing in Astoria, to now when he takes his own grandchildren out he sees a different time. 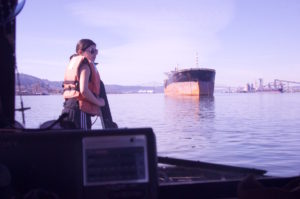 “My three sisters didn’t mind being on the tug in nice weather but they made themselves scarce when it got cold,” Brusco said. “It was tough for me to see my friends swimming and playing around in the water while I was working, but even that changed after I bought my own pickup and still had money to jingle in my pocket.

“Today, we do light towing and salvage work which includes some scuba diving and from time to time I take the grandchildren out on the river for a ride. There are several generations of us Bruscos on the river and I have no thoughts of retiring.”

The Lady Runs a Forest