Guardians of the Flock 1 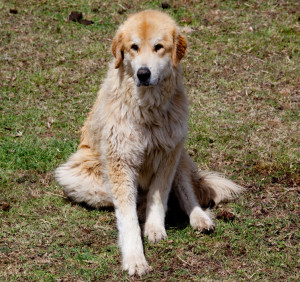 That was the year the predators found us. Every time we turned out our sheep and goat flock, between dogs and coyotes, we were losing a lamb or kid every day. We fought back with rifles and snares. Grazing schedules were interrupted and altered; guard donkeys and llamas were of limited success.

The losses hit us hard. Our meat business was looking a little rough around the edges. Then my wife spotted a dispersal sale from a livestock guard dog breeder.

We made the call.

The breeder had two experienced, crossbred, sibling sisters who needed a new home. We bartered, bargained and traded, and before long, Clover and Crimson were rolling in our driveway.

They were young, strong and over a hundred pounds apiece. Both had frightened eyes, but that was to be expected given their changing circumstances.

“I use a hand signal, without touching the dog, when I want them to submit,” the breeder explained, “this allows me to do anything which needs to be done, even pulling teeth.”
She pointed out the dominant dog and told yours truly that I might want to use it for establishing myself as higher in the pecking order. Not knowing what to expect, I channeled my inner alpha wolf and gestured.

As the breeder was pulling out to return home, she gave us last-minute bits of advice for working with our new livestock guardians. She also explained the reason for her dispersal sale.

Apparently, she and her neighbor had a property line dispute over a new well house. She won and he changed his building plans.

However, in a cruel twist, her neighbor took to firing his shotgun in the air whenever he caught her dogs out in their fields. With no property damaged or injured animals, there was nothing the authorities could do.

“Except,” the breeder said, “my proven guard dogs would run cringing to the house every time they heard gunfire.”

She continued, “I’ve decided to sell out and move away.”

As she pulled out our driveway, I was sure the gods would reserve a special place in a very warm spot for a man who takes his revenge on dogs. Still, we were in a tough spot, we needed to make a difficult situation work.

We held the flock in their pens for a few weeks while canines and critters got used to each other. At night, both dogs hopped the fence and checked out their new territory, presumably leaving scent in all the proper places and announcing to our local predators that they were a force with which to be reckoned.

At feeding time, neither of the dogs would approach us nor allow themselves to be touched. We didn’t think much about it.

The sisters adapted and were turned out on range with our flock. Crimson was the outrider and intimidator, while Clover stayed close. Our predator problems dried up.

Then one morning, the sisters were gone. We made a few frantic phone calls to neighbors. They’d seen nothing. Then a couple days later, word came from several miles away that our dogs had been spotted deep in the desert canyons harassing a cougar out of the region.

A day and a half later, Clover returned and took up her post with the flock. Her sister, Crimson, arrived limping badly the next evening. Both were exhausted, thirsty and glad to be back with their sheep and goats. We fed them well and let everyone rest for a couple of days.

We tried to express our gratitude to them. Neither dog allowed any human touch. We never found out what happened to the cougar.

One day that fall, Clover returned from her rounds. She wasn’t right and we couldn’t tell if she was sick or injured as she lay on her side in the sheep pen, whimpering quietly.

Even using the hand signals, every time we approached, she’d growl and crawl off, crying piteously. It soon became obvious we were increasing her distress in our attempts at physical examination. Only a fool will try to force himself on an injured dog that intimidates cougars.

Meanwhile, Clover’s sister, Crimson, stood worried guard, shifting her weight back and forth between front paws.

Hoping she’d cure herself from a case of food poisoning due to an overly ripe carcass, we went to the house and called people for ideas to help our situation. None came. Helpless, we didn’t sleep much on that night.

Early the next morning, we found Clover dead.

Editorial Note: this is the first of a two part series about Crimson and Clover the livestock guard dogs. See https://countrytraveleronline.com/2014/05/29/part-2-guardians-of-the-flock/ for the conclusion.

Bing Bingham is a writer, rancher and storyteller. If you’d like to read further stories of the rural, American West, visit www.dustydogcafe.com

Guardians of the Flock 2 (continued)…