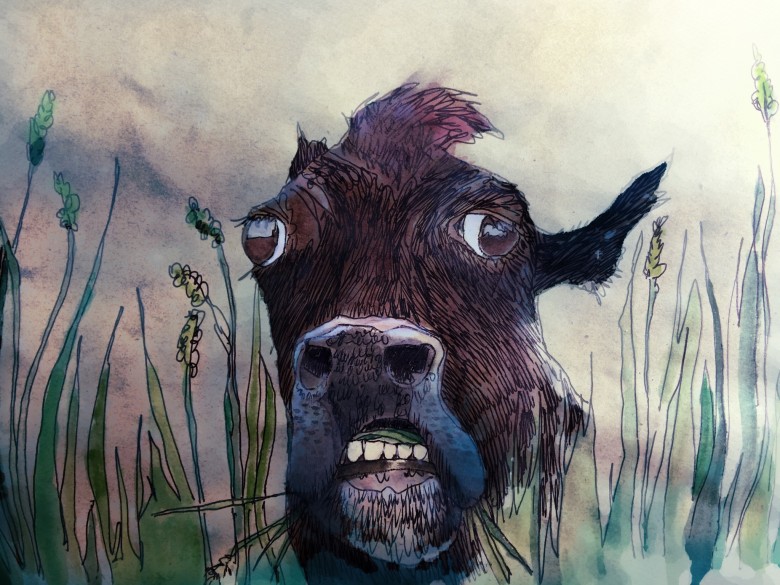 Danger on the Zumwalt

Darkness settled over the clearing just outside a cave on the southern slope of Lee Mountain not far from Puck Lakes.

“Time for howls,” Ebony Wolf announced shuffling a patch of dry grass into place just inside the cave opening.

“A scary… Tell us a scary!” Stem said ignoring his mother. He nuzzled Snap in the side and repeated, “A scary.”

“Yeah, a scary scary,” Dimple added whirling in a circle in front of Snap.

Snap glanced at Ebony to measure her reaction. She raised an eyebrow and curled her lips into a gentle smile.

Snap shook himself and settled to his belly. The wolf pups scurried to cuddle next to their father.

“Back in Imnaha… remember… that’s where I came from… “

“Yes, many…many lights and darks away.”

“What was scary in Imnaha?” Frisk asked.

Snap chuckled, “Lots if things… lots of scares… but the one I’m going to tell tonight was bone chilling scary. Let me tell you.” Snap paused, cleared his throat and began.

“One day… all by myself I climbed up and over the rugged edge of a scary cliff.” He paused to monitor the interests of his pups.

Their impatient shifting told him to get on with the story.

“The cliffs weren’t far from home… just west of the Inmaha Valley where we lived… But my dad, Alpha Wolf, warned me not to go near them by myself.”

“Zumwalt… that’s the rolling hills and prairie to the west of Imnaha,” Snap explained.

“What did Grandpa say would happen to you?” Stem asked, dragging an impatient foot across the ground.

“Alpha said, ‘the cows on the prairie are easy marks, but…’” Snap paused enjoying the excitement in the eyes of the three pups. “But, Alpha said, ‘you would be an easy mark too.’”

“What did you say?” Stem asked.

“I told him that the one I saw was near a clump of pine and I bragged about how I could have taken it by myself.”

Snap lowered his massive head to look deeply into his sons eyes, “‘You better not try,’ Alpha told me. ‘Bigs have magical ways of watching their cows… keep most of them corralled with wire walls and boss them around. Don’t go after them. And you’d better stay clear of the ones feeding in the open grasslands, too. Bigs protect those with fire-spitting sticks… fire that burns right through you… quick as a blink… bad… bad enough to kill you,’ he paused to reinforce the seriousness of Alpha’s warning, ‘… kill you without a fight.’”

Snap paused looking at the awe on the faces of the pups. Then, his voice shaking, he softly growled, “’they use guard dogs.’”

“Guard dogs,” Snap repeated. “Some are white dogs and some are black like your mother and others look more like me.”

Stem looked at his own dark fur, “And brown like me?”

“And brown… They’re smaller then we are. In a fight you’d think they’d be easy prey for your strong jaws, but they’re not. They know to fight… They’re not afraid… they know how to win.” Snap paused for effect and added with emphasis, “Stay away from guard dogs!”

“I will,” Dimple snapped.

“Well, the hair on my neck bristled but I said to myself, ‘What does the old one know? We can bite hard enough to crush bone… Can a guard dog do that?’”

“I knew I was supposed to obey Alpha… It was the tribal thing to do, but I wanted to see for myself. I decided to defy him and return to the rocky hilltop overlooking the field where the cows were grazing.

“Did you see any?” Frisk asked pawing Snap’s foot.

“Yes, there were cows but I didn’t see any guard dogs. ”Snap got up and began pantomiming, “I carefully climbed the jagged rock strewn cliffs. The rocks were in loose piles. They slipped beneath my feet. I was hundreds of feet above the Imnaha Valley floor.”

Frisk got to his feet and mimicked Snap’s moves.

“It was dangerous… I might have slipped on the rocks and plunged over the edge to death below,” Snap paused and studied the fear in the pups eyes.

“Yes,” Snap said, “but I couldn’t. A voice inside me told me I was right to question Alpha’s bossiness. ‘You are no longer a pup,’ the voice said.”

“I was… I knew that defying Alpha would get me into trouble.”

“Did you do it anyway?” Stem quizzed.

“Yes, I set my front paws on the edge of the cliff and looked into deep canyon below. It was breathtaking… spectacular. I felt strong enough to challenge the mountain… to face a guard dog, if necessary. I made my way to the edge of the Zumwalt. I crouched down and carefully crawled toward the open field. I slowly raised my head so I could see above the tall grasses. There were cows grazing in the distance… their heads down unaware of the lurking danger. I lowered my head and slowly inched forward. I lost sight of the wayward cow.”

Snap paused to allow time for the scare to settle in. He turned his head and began licking his left hind leg.

“The cow… where did the cow go?” Stem asked anxiously.

“Well, suddenly, she was almost on me. I sprang up out of the covering grass to face the frightened cow.

“Like this?” Stem quizzed crouching into a stalking position.

Snap ignored Stem’s interruption, “For a moment the cow’s throat was within easy reach. I hesitated…”

“I’d never done that before… and that brief moment gave the cow time to run. Without thinking I leaped to give chase.”

Snap moved his nose near Dimple’s face, “And then I heard the snarling bark of a dog and a crack, of a bullet ripping foliage as it zipped by me.”

“Instinct took over. My front paws gripped the dry dirt. I pivoted and ran as fast as I could zig-zagging through the grasses and over the edge of the bluff.” Snap paused again to catch his breath.

“The stick… did it spit fire?”

“The guard dog? What happened to guard dog?” Frisk asked.

“Oh No! Was it a long way down?” Dimple yelled.

“I tumbled over the jagged rock… over and over… toward the edge of the cliff,” Snap paused again to lick his right haunch.

“I managed to stop just before plunging onto the boulders far below. Snap stopped and waited for the pup’s reactions.

“What happened? Did they come after you?”

“I lay on my side for a minute or so… I couldn’t think… then, began to wonder if the guard dog… or the big with fire-spitting stick would come to the ledge above me and finish me off. I looked up. I saw nothing but the rocky lip of the cliff’s ledge and blue sky… I breathed easier.”

Frisk asked, “How’d you get down?”

“Were you hurt?” Stem wanted to know.

“My right front paw was bleeding and the ribs on my left side throbbed with pain. I didn’t want to move but I struggled to my feet and dragged myself down the hillside and into a stand of pine.

For a long time I lay in the shade recovering from my encounter. Then, I got up and limped my way home thinking, ‘Alpha was right. I should have listened.’”

“Past time for howls,” Ebony said coming out of the cave entrance to herd her pups in and to bed.

Snap stepped to the large bolder near the cave and howled into the night. No answer came but it didn’t matter. He was at home with his family.

A Diary of Snap Wolf’s Journey to Find a Mate is available both in paperback and Kindle at Amazon.com