Oh my Bridge of the Gods…. 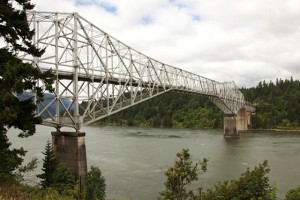 The Bridge of the Gods spanning the Columbia River between Bonneyville Dam and Cascade Locks.

CASCADE LOCKS, Ore. – Laura and I were finishing lunch in Cascade Locks, when I looked out the window of the restaurant where the Bridge of the Gods crosses the Columbia River. Being prone to the impulsive, crossing it seemed like a good idea. How dangerous could it be? It was only a short walk on level ground… it wasn’t something stupid like playing in traffic.

I muttered, “Its not raining right now. Do you wanna do it; walk across?”

Laura did not hesitate. “Lets do it. This is so cool I’ve always wanted to.”

We left a tip on the table, headed to the parking lot, and in anticipation that the March clouds would yield spring showers before we were done, buttoned up our coats. Before us stood the modern Bridge of the Gods, the third known to occupy this spot on the Columbia.

The first bridge appeared less than a thousand years ago when part of a small mountain on the north side of the river collapsed in a landslide creating a dam several hundred feet high. Eventually the impounded lake over topped the dam and cut a channel full of rapids.

The second bridge is reported in various legends of tribes near the Columbia. I like the one with the love triangle. Two braves competing for the love of a maiden use the bridge to cross the river. The Great Spirit got tired of the arguing, crashed the bridge into the river and turned the braves and the maiden into volcanoes. Today, we call the volcanoes Mt. Adams, Mt. Saint Helens and Mt. Hood. Like the lovers, they have continued to spit steam and throw rocks at each other.

In 1926, men with rivets built the third bridge. The steel cantilever bridge spanned over 1,100 feet carrying traffic between Oregon and Washington.

With the flooding of the Bonneville Dam in 1938 the clearance between the bridge and the river obstructed river traffic so the whole bridge was elevated and extended about 800 feet.

From the parking lot we assessed the challenge, crossed the main street, walked down the short path and up the steps to the Oregon end of the bridge. This adventure was not free. I generously handed over a dollar to cover our toll as we listened to the instructions.

“Walk close to the guardrail facing traffic; It’s best to make eye contact with the drivers so you know they see you; there is no sidewalk.”

Confidently we walked on the concrete apron toward the first steel girder. The concrete transitioned to steel grating. The ground fell away and a parked train occupied the last bit of Oregon. This was the first time I looked down onto an idling locomotive.

Laura expressed my growing apprehension: “I didn’t know that we could see through the bridge deck.” Not only was the roadway made of open grate there was nothing on the other side of the guardrail except an occasional girder.

I snapped a picture with my phone in an attempt to appear confident and headed out over the water, never to touch my phone again till I was back on solid ground.

There is a fair amount of traffic on the bridge. The cars and pickups didn’t bother us, but the semi-trucks sure did. We felt them coming and we felt them pass, even though they slowed to less than the posted 15 mph. One or both hands were on the handrail as we made as small a target as possible for the passing big trucks.

I think the brain has a sanity alarm that lets us know there is something wrong about walking on an open-grated road bed. The rational brain tells me my foot will contact a solid steel honeycomb road deck. My instincts tell me there is nothing below me but the river 5,140 feet below. I know it’s really only 140, but the drop seemed a lot further and the bridge a lot longer.

Congratulating ourselves on reaching the “Welcome to Washington” sign we paused to look out, but not down, at the beautiful view. We gave each other a “well we’ve come this far look” and resumed the trek. I held onto my new best friend, Mr. Hand Rail with my left hand, Laura held onto the back of my coat as well. The state of Washington and terra firma was a great relief and we relaxed clear of traffic on the slightly wider bridge apron that is until we remembered that the car was still in Oregon. I was going to suggest hitch hiking when Laura spotted a break in traffic allowing us to cross so we could again walk facing traffic.

The trip back was all mission and no sightseeing. It seemed that the ratio of semi-trucks to cars tripled in the Washington-bound lane. We made steady progress and added waving to eye contact to improve our odds.

The last semi-truck passed providing a break to travel the last few yards to the refuge of the bridge apron. The short walk to the car provided a chance to express our thoughts that; a) it was a good adventure and we were glad we did it; b) that it was much more intimidating and exciting than expected; and c) we would not do it again.

All in all, I hadn’t had more excitement and entertainment than that for a mere fifty cents in a long time.

-Story and photos by Patrick McGinty ©2015, mystery writer and author of Caise Closed