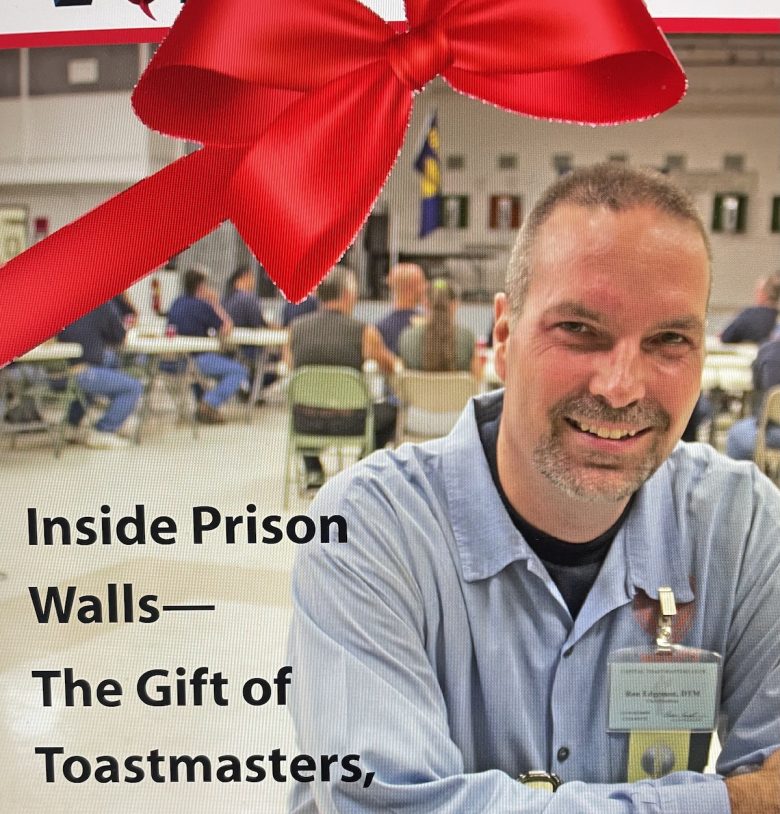 Salem, Ore. – It took 80 years for the gift of a real Toastmasters club to make it inside the walls of the Oregon State Prison (OSP). However, it didn’t take them very long at all to recognize the benefits. Capital Toastmasters, club #693720, is thought to be one of the first award-winning correctional institution clubs in existence. It is a story of how Toastmasters can improve people’s lives inside prison walls.

Capital Toastmaster members have achieved the President’s Distinguished Award for seven years in a row. They can (and do) boast about competing and winning debate tournaments with Willamette, George Fox, Gonzaga, Northwest and Seattle Universities, University of Washington Bothell, and Linfield, Corban, Lane and Lewis & Clark Colleges.

Club President Ron Edgemon, who earned his Distinguished Toastmaster Award (DTM) while incarcerated, is serving the last seven years of a 25-year manslaughter charge. He works as an administrative clerk of prison activities, regularly leads his fellow Toastmaster members in facilitating other inmate groups, helps them with prison admission and orientation programs, and conducts mock real-world job interviews.

Edgemon recognizes that it is the gift of Toastmasters that has allowed him to develop his communication and leadership skills, but credits fellow Toastmasters, prison staff and past District 7 Governor Allan Edinger, DTM, for the club’s success.

“I was skeptical when Allan came to talk to us about changing from our free Capital Gavel Club to one I thought was going to be the same except that now we would have to pay for it,” Edgemon said. “However, what actually happened was -we started learning to communicate. Going step-by-step through the Toastmaster manuals we were learning things that were brand new to us – like how to give and receive positive and negative feedback, give and accept praise and earn and publicly accept awards. I remember how great it was to see the first new member, who was so scared his squeaky voice sounded like fingernails raking down a blackboard, overcome his fear and earn his first award. It was like now we were getting to learn to cook from a mom instead of a book.”

Allan Edinger, DTM, who is now the prison liaison for District 7, talked about how the OSP club got started.

“I was D7 Governor, when we launched a club-building campaign, and Capital Toastmasters was one of the 17 new clubs we brought in that year,” Edinger said. “I had visited the Capital Gavel Club as early as 1992, but didn’t approach them about switching until 2004. The first night, 20 members signed up and paid.

“On the first Wednesday of every month Capital’s 30-plus members (which includes me and Janice Hallmark), hosts five or six visitors from outside clubs. Janice and I also participate in Capital’s speech contests so we can represent the club beyond the club level.

“Ron earned his DTM by communicating through monitored phone calls and emails, making club visits by proxy or holding club, area and division governor meetings inside the prison. For the ten-years we’ve been keeping records, Oregon Toastmasters who join community clubs after leaving prison, have a zero rate of recidivism. I get lots of inquiries about starting prison clubs, but would like to see more of them follow through.

Edgemon speaks with enthusiasm about the number of lives he’s seen drastically change in his ten years as a Toastmaster.

“The more we do the more we learn and we won’t be the same people going out that we were coming in,” Edgemon said. “The benefits of a real club have been in learning to do the extra. Changing the ‘what’s in it for me’ mentality to the ‘it’s not about me’ mentality. I can’t say enough about the members, the executive body, the staff, Allan and everyone else who helps us do it.”

Janice Hallmark, DTM, a community Toastmaster member who continues to drive the once-a-month, 140-mile round-trip from her home in Springfield to the prison, says Capital Toastmasters is one of the highlights of her month.

“These members, who have hurt themselves and others by making bad decisions, are changing their lives,” Hallmark said. “Through the gift of Toastmasters, they are getting the tools they need to make better decisions – decisions which will help everyone.”

More information about Toastmasters is available at www.toastmasters.org

Coyotes and sheep in Columbia County…