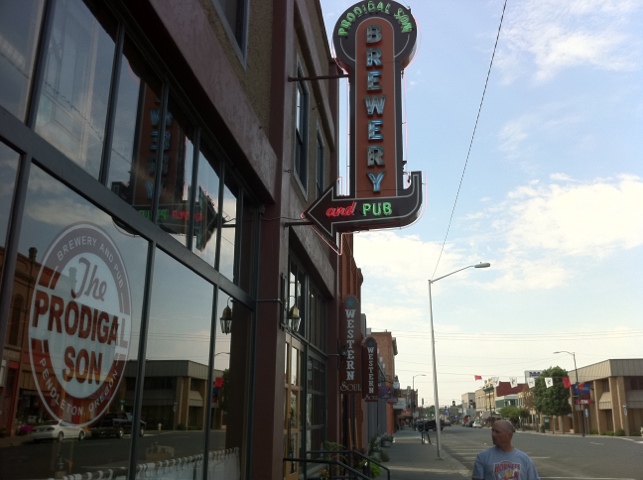 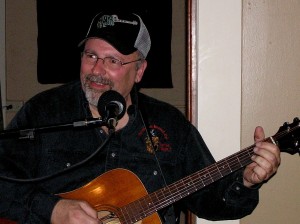 Retro Ed performing and soaking up memories that go back to the twenty years his father had a plumbing business in the building.

PENDLETON,, Ore. – Prodical Son Brewery and PubWalking inside the Prodigal Son Brewery and Pub in Pendleton is like stepping back in time. Proprietors Tim and Jennifer Guenther have preserved the historical character of the building, including the office where my parents toiled long hours figuring plumbing and heating jobs and keeping the books for their business, Merriman Plumbing and Heating, from 1955 to 1976.

I remember the first time I walked into the Prodigal Son shortly after it opened in 2010 and felt a wave of nostalgia wash over me. It was like my memory came alive, and I saw my parents as if I’d actually taken a step back in time. There I was, watching my parents working together in the 1950s.

My father, Ed Sr., was in his prime on the phone negotiating a contract, and my mother was sitting behind her desk smiling and laughing as she visited with a customer. Everyone who came into the plumbing shop wound up telling my mother, Virginia, all of their troubles, and usually most of their life’s story. She was a good listener, and she had a way of making people feel better. She was like a counselor, only in those days people talked their problems over with friends like her. 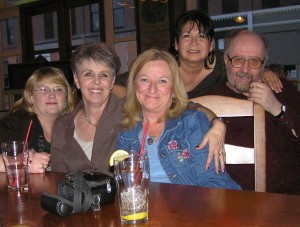 My Dad never went to college, but he read more and seemed to know more than anyone. Every night when he’d come home from work he’d read magazines and newspapers and books. I guessed he knew more about politics and how the country ought to be run than the president or members of Congress. At least that’s the way I remembered him that day when I walked into the Prodigal Son and saw him once more through the eyes of a seven-year-old boy.

We lost dad in 2001, but that day in the Prodigal Son I remembered working digging ditches for him one summer at age 13. I was covered from head to toe with dirt when I saw a group of the most popular girls in 8th grade walking towards us downtown. We were walking from the shop to the bank to cash my first real paycheck. He saw I was looking for a place to duck out of sight, and he stopped, looked me in the eye, and said “Son, don’t ever be ashamed of earning an honest day’s pay.” I thought about it, straightened up, put my shoulders back, and gave a nod to the girls as they walked past. I’ll never forget the pride I felt at that moment and the wisdom my father shared with me.

Mother will be 90 in February. She enjoys going into the Prodigal Son and being part of the family atmosphere; especially the children’s play area, which is housed in what used to be her office. Her favorite thing to order is the Rueben sandwich and hand cut sweet potato fries.

Dad was big on buying local, and one of his favorite things to do on summer evenings was to fire up the grill and cook sausages, hamburgers and hot dogs, so I think he’d have liked the grilled bratwurst and sauerkraut, hamburgers made with hand formed hamburger patties from Sexton Ranches, Tillamook cheese and bacon from Hill Meat Co.

When I looked down at the floor of the Prodigal Son where the paint was worn through, my memory drifted back to my youth. I saw myself on the floor at age 14 with a paintbrush applying a fresh coat of tan paint over the top of the worn through maroon and rust-colored paints applied in years gone by. Two years later I covered up the tan paint with a coat of grey. Since then the floor has remained much as it was when Merriman Plumbing and Heating moved out, in 1976 with the maroon, rust, tan and gray colors worn through to the concrete in many areas of the dining room and bar of the Prodigal Son.

A historical plaque mounted on the corner of the building says it was built in 1917 and was occupied by a Packard dealership, which is reflected in a worn sign that says “The Finest Good Best Service.” In the late 1920s and 1930s other automotive businesses operated in the building. Another well-worn sign painted on the balcony says “Rolled Oats,” which reflects the building’s use at one time as a feed and grain store.

When I looked up and saw the open balcony and railing made of pipe, I remembered that’s where Merriman Plumbing and Heating’s sheet metal man, Marion Olson, slept every Friday night. He lived in Milton-Freewater, but on payday he always stayed in town and hoisted a few brews at the Rainbow Café with the rest of the crew. Near the bottom of the stairway leading up to the balcony was a refrigerator made out of an old Pepsi machine. Dad kept it stocked with pop for whoever wanted pop, but Marion kept his quart bottles of Hamm’s beer there too.

One Saturday night when I was 16, my buddies and I were trying to get our hands on some beer, and I remembered Marion’s stash. We drank his big quart bottles and filled them up with water and dishwashing soap and shook them up so they’d look foamy. I knew he wouldn’t drink it until the following Friday, which I figured would give us plenty of time to replace the beer we’d borrowed. Unfortunately, luck was not on our side, and Friday came and went and we hadn’t replaced the beer. Monday I came into the shop to take care of my janitorial duties, and when I walked past Marion he gave me kind of a dirty look, but never said a word about the missing beer or the dishwashing soap we’d replaced it with. That was the last time Marion kept beer in the old pop refrigerator, but he never said a word to me or to my dad about the incident.

I remember the guys used to kid Marion about his feminine name, but Marion just laughed, and all of the guys knew they were lucky he was laughing with them because he was one of the biggest, toughest guys in the construction industry in Pendleton, and his voice was at least two octaves below anyone else’s. With his background I’m sure he would have enjoyed hoisting Prodigal Son’s Beer Named Sue, a hand crafted golden ale, made with two-row hops from the Pacific Northwest and Vienna malts.

Between Marion Olson and Dan Russell, a legendary plumber who had the distinction of being a golden gloves boxing champion, all the other construction crews in town knew better than to mess with the crew from Merriman Plumbing and Heating. Often other members of the crew would drink too much and get into brawls, but then Marion and Dan, who later became a business agent and enforcer with Plumbers and Steamfitters Local 598, would step in, send bodies flying, and that was the end of it, or so the legend goes.

Come to think of it, I suspect Marion and Dan would also have enjoyed the Prodigal Son’s Bruce Lee porter.


A Cat for Christmas