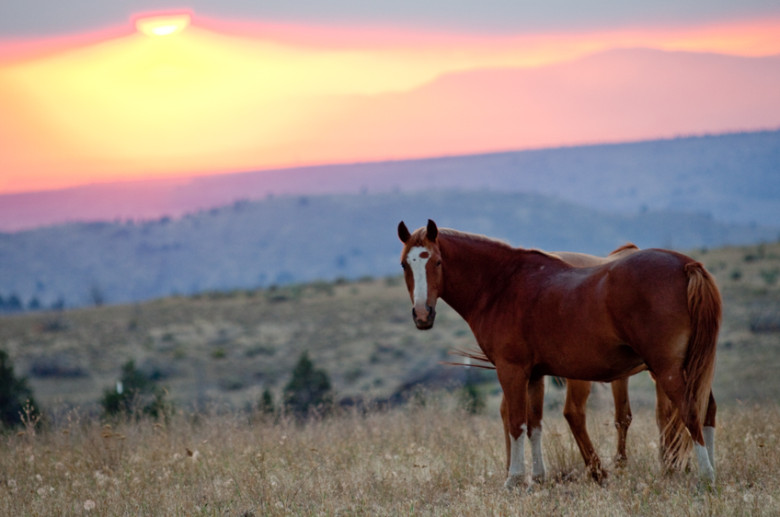 The wild mares whirled and swirled in alarm, as the herd stallion, eyes wide and ears erect, rushed to their aid. He made a brief, intimidation run toward my hiding place behind a juniper tree.

“Uh oh,” I thought to myself, while planning an escape of last resort in the upper branches, “they must have spotted me when I leaned too far out for a photo.”

Wild stallions mark their territory with piles of manure. When re-upping their claim, they’ll back up to the same spot and make another deposit. Some of these boundary markers can get knee deep.

When taking photos of wild horses in the deep desert, often it involves a long wait. For my money, it’s hard to find a more comfortable seat than a dried and crumbling stud pile—it’s soft and there are no jagged rocks with sharp edges.

I was about thirty feet downwind from where the stallion was snorting and pawing to make himself as large and intimidating as possible.

My body language, behind the tree, was submissive, averting my eyes and hunching my shoulders. I made sure not to present myself as a recognizable human silhouette and began a steady chant in my mind…

The stallion watched me carefully, unable to perceive a threat. Slowly, he calmed. After a time, he cocked his hind foot, a sign he was beginning to relax.

“Gotcha,” I grinned, still watching with my peripheral vision.

Moments later, the stallion swung his head back to his flank, biting at some bothersome flies—a sure sign his concern was waning. Immediately, he returned his gaze in my direction, checking for any movement.

“I can out-wait you now,” I thought, chuckling quietly.

About a half hour later, the stallion, satisfied I was no threat, moved off to graze. His mares were much calmer, eating and snoozing in the sun.

The wind was still in my favor. Slowly I brought the camera to my eye. For almost an hour, I took pictures as wild horses grazed and dozed around me.

That’s when I got over-confident. Stretching out from behind my sheltering juniper tree to get a shot of three mares grazing together, one horse noticed the movement and sounded the alarm.

The stallion was no longer interested in challenging a threat he didn’t understand. He wanted to leave. Gathering his mares, he moved them out at a fast walk.

It’s an easy thing for a photographer to sell photos of wild horses grazing, napping or running. However, there’s not much demand for pictures of horses walking away with their butt to the lens. My photo opportunity was walking over the hill into the next ravine. I pulled myself up onto wobbly legs with the help of my trusty juniper tree and hobbled into the open.

By now, the stallion had no doubt I was human. Ears erect and tail sticking straight up, he snorted and blew as he called his mares to hurry over the ridge.

The last I saw of the herd was when they were stampeding through the desert, dust rising from their hooves while the stallion guarded their rear. For a photographer, it was a visual feast.

Horses gone, I smiled as I gathered gear from my dried manure nest. In my mind’s eye, I pressed the replay button—several times—of the stallion urging his mares over the ridge.

I think I smiled during the entire drive home.

Bing Bingham is a writer, rancher and photographer. If you’d like to read further stories of the rural, American West, check…. http://dustydogcafe.com/blog/