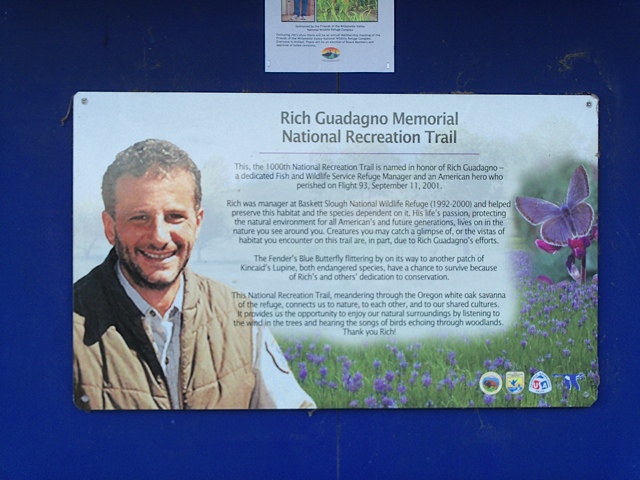 SALEM, Ore. – Birders agree that the drive to Basket Slough National Wildlife Refuge is worth the trip (on Highway 22, ten-miles west of Salem). Depending on the time of year, birds appear singly, in small flocks and sometimes in flocks of enormous size.

On my last visit, I could tell the ducks in the marsh were nervous. Small flocks flared into the air one after another – punctuating the line of flight of a bald eagle. The eagle was not seriously hunting, just en route to a roost. But the ducks didn’t know that.

I wondered what Ranger Rich Guadagno would have had to say about the scene? Rich invested eight years in the restoration of Basket Sough Wildlife Refuge before his death in 2001 as a passenger on Flight 93. The eagle would say he did well, and so would the thousands to ducks, geese, swans, hawks, cranes, songbirds and other migratory birds that visit the slough.

Ranger Guadagno was working on the restoration the first time we met in the late 1990s. He pointed to the marsh expounding on the reintroduction of native wetland plants.

“The plants surprised us,” Rich said. “When we flooded the marsh, seeds that lay dormant for many years sprouted. This proves we can return this farm to marshland.” Rick understood the importance of these plants to all the creatures visiting or inhabiting the refuge.

The second and last time I met Rick was on the trail that loops through the oaks covering the small knoll overlooking the marsh.

“I saw a bird, smaller than a Red Tail Hawk with very pointed wings hunting over the grass,” I said. Rick’s face lit up.

“You are very fortunate,” he replied. “We have a nesting pair of Peregrine Falcons living on the refuge. Where did you see her?” Rich headed up the trail, binoculars in hand.

Basket Slough National Wildlife Refuge is a small part of the Willamette Valley which itself is the product of amazing cataclysmic events and thousands of years of human intervention.   The glacial floods fifteen thousand years ago deposited much of eastern Washington’s topsoil in the Willamette Valley. The first settlers arrived several thousand years later to find thick forests. Over time the natives used fire to open broad expanses of savannah best suited to the bison and elk they liked to hunt and the plants they liked to eat.

By the time the refuge was established in 1963, most of the marshlands that once dominated the Willamette Valley bottomlands had been drained and farmed, including those in the 2500 acre preserve. Rick worked to restore the wet marsh by removing drainage tile and flooding the area with water from a new dam reservoir. The terrain was improved to include islands and impediments to water flow. These efforts aimed at assisting the Dusky Canada Goose also benefitted many other birds, plants and animals.

Two brief encounters were enough to learn that Rick’s place in life was in the service of the refuge. The terrorists may have taken his life but the legacy of his work survives at Basket Slough.