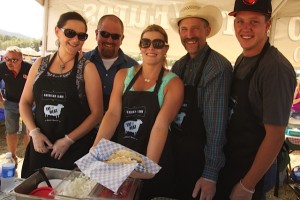 BROWNSVILLE, Ore. — When Reed and Robyn Anderson and their neighbors invite folks over for some music, they don’t kid around. On Aug. 14-16, 18,000 country music fans took part in a three-day Bi-Mart Willamette Country Music Festival held on 1,000 acres of grass seed fields west of Brownsville. In addition to the success that goes with a capacity crowd, 500 student and adult volunteers sold enough festival tickets, water and ice to earn $80,000 for their local school clubs.

The Andersons, who also raise and process grass-fed lamb in Brownsville, were the first to volunteer their 300 acres of fescue fields for the good of the school fund-raising project. 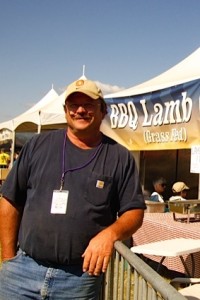 “The first year the festival was held closer to town but it didn’t work out very well,” Reed said. “Robyn and I thought our property would make a perfect place to hold something like this and if it didn’t cost and it didn’t hurt anything, then why not try it?” Since then, other neighbors, including Ken Sayer and the Lafayette and Marchbank families, have volunteered 700 acres more.

“We do get some soil compaction,” he said, “but it is easily restored when we put some compost on and get back to farming.”

A fifth generation sheep grower, Anderson raises sheep and sells fresh lamb directly to customers. Other than getting the Oregon Sheep Growers/American Lamb Board a free booth at the festival to promote lamb, neither Anderson nor his neighbors make money on the event.

“This is a curly fry and elephant ear crowd and many are trying lamb for the first time,” Reed said. “It has been fun to see the people who come looking for it because they liked it last year, including singer and television personality Blake Shelton and his crew, who 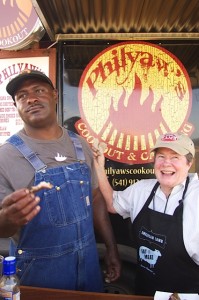 asked us to bring lamb for the after show dinner this time instead of pizza.”

The festival profits go to individual Central Linn school clubs. “Last year the booster club purchased new uniforms for all the teams and the history club took a trip to Washington, D.C.,” he said. “These kids work so hard it’s tough to keep up with their requests for more tickets to sell. It’s good for the kids, it’s good for the surrounding businesses and as soon as we rest up we’ll be ready to do it again next year. “Besides, the sheep are gone by then and the crop’s are in, so why not?”

Jan Jackson©2014 – As published in the Capital Press

High Heels on the range