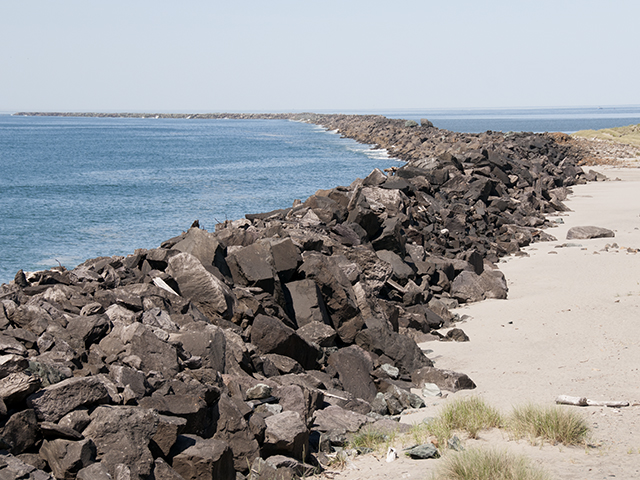 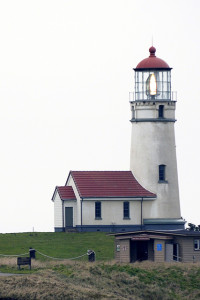 the Cape Blanco lighthouse just north of Port Orford in Curry County… the seashore there marks the farthest west you can be on dry land in Oregon; photo by Larry D. Rea

The boundary of Oregon, the outer edge, forms a closed loop roughly in the shape of a rectangle. An examination of this border can start anywhere but for simplicity let’s start where the 42nd parallel of north latitude, heading west, plunges into the surf of the Pacific Ocean and marks the Oregon-California border. Oregon does not extend farther south than this point.

“Ocian in view! O! the joy.” momentous words spoken by William Clark… Corps of Discovery… he was mistaken, they were still 20 miles from the ocean.

If you were standing at the water’s edge, using our point to start, you might think you were standing on the western edge of Oregon. But, like William Clark you would be mistaken, contrary to thought Oregon claims title to the submerged land up to one nautical league off shore. How far is a league? It is described as the distance an able bodied person can walk in an hour, said to be three miles. It is also the distance a six-foot tall person can see, standing on water’s edge looking west over the ocean, in our scenario.

If you were to drive north 345 miles on US Highway 101 the ocean would be in view for much of the way to Astoria, near where William Clark uttered his momentous comment. But to really enjoy the west coast boundary of Oregon is to travel by air one league off shore… low and slow… where you can observe the rugged coastline resulting from tectonic plate movement, see the surf crashing into jagged rocks, the sandy beaches, see giant gray whales cruising their routes of migration… and see nearly a dozen lighthouses marking the rugged coast, warning mariners land is near. If you drive you must stop at the Cape Blanco lighthouse just north of Port Orford in Curry County… the seashore there marks the farthest west you can be on dry land in Oregon.

Finally, stop at the South Jetty, found at the northern terminus of coastal Oregon… near the town of Hammond in Clatsop County… south and west of the jetty is Pacific Ocean, to your north is the Columbia River and the starting point for our next chapter, traveling the northern boundary of Oregon.

If you fly over Oregon are you still in Oregon? The short answer is yes… perhaps that is another story… marks on a map are just lines on a surface… vertical limits may be debatable but for now we will accept airspace over Oregon belongs to Oregon.

Story and photos by Larry Rea


West to East On The Columbia River…