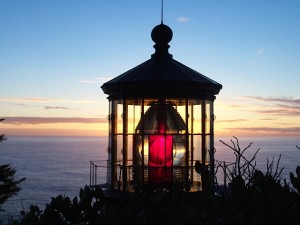 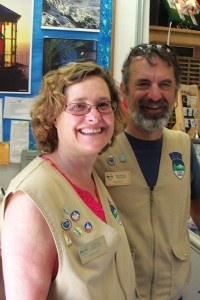 CAPE MEARS, Ore. – Park nomads Micheal and Diane Chacon came to rest temporarily ten miles west of Tillamook at Cape Meares State Scenic Viewpoint. That is, Cape Meares is the latest park where they volunteer as interpretive guides. Commuting from their RV parked nearby, they work three days a week, five hours a day, talking to some of the thousand or more visitors who come each day to see Oregon’s shortest lighthouse.

Cape Meares is a link in a chain of lighthouses that guides ships safely along the treacherous coastline. It is easy to forget how important these lighthouses were and are to the safety of shipping. Not long ago, sailing along the Oregon Coast on a cloudy night could be compared to closing your eyes and running through your house meaning you are liable to run into something.

On a sunny day atop the Cape Meares Peninsula, it is hard to see any danger (unless you are a fish and the sea lions are hunting). Located 217 feet above the ocean, visitors come for the beautiful view, the birds, the shore creatures and of course the whales. Diane and Michael answer questions about the wildlife as well as what it was like for lighthouse keepers who had to carefully strain the kerosene and fill the reservoir, clean the First Order Fresnel lens and wind the clockwork every two hours to keep the light rotating to flash its distinctive signature every four minutes. The rotating lens assembly is precision equipment. The two ton glass and iron lens assembly is so well machined that the keeper can easily rotate the lens with one hand if the clockwork drive failed. When the light became operational in 1889 the lighthouse used kerosene for illumination. In 1938, electricity eliminated most of the work for the keepers at the lighthouse.

Between tours of the lighthouse Michael related how he was not sure if he was qualified to be a guide. “The volunteer coordinator’s question to me was could I climb 600 steps every hour. My concern was that I was not an expert on lighthouses. That’s good they said, tours need to be ten minutes or less not two hours or more.” Diane reflected that working in the park system was a great retirement activity. “We have been planning this for twenty-five years. My mom and dad volunteered for seven years and showed us we could do it too.”

Visitors appreciate having people available to answer questions. The topic of whales is among the most common questions. “We get so many questions about whales that we decided to also volunteer at the Hatfield Marine Science Center. We volunteer Spring and Fall in the parks, but it is so nice we like to spend summer in Oregon with the grand kids,” said Diane. The most common question for which Michael and Diane is one they received no training is: “where is a good place to eat?”

“We like to learn about local area as well as the parks. Spending a month allows us to find fun and unique attractions, like the Sawdust Theater Company in Coquille, Oregon, near Coos Bay.” Diane and Michael plan to volunteer at the state parks for years to come. “There are so many parks from which we have received so much we want to give something back. At the same time we get so much from the visitors who help us see the park through their eyes.”