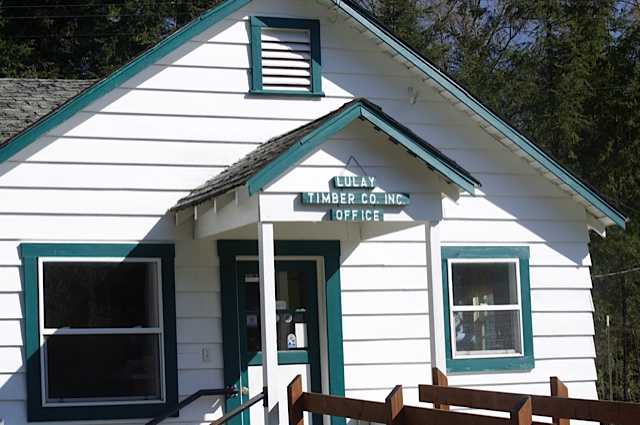 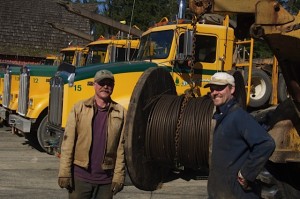 Pausing in front of their fleet of log trucks, are Chuck Lulay, third generation left and son and son Dustin; photo by Jan Jackson.

SCIO, Ore. – Armed with timber industry experience passed down through four generations, university degrees in forest engineering, science and business and a love of the place they were born and raised, the brothers and sons of Lulay Timber Contractors help private and public land-owners manage and harvest their timber. Following the dictates of the Oregon Forest Practices Act and using the latest technology and equipment, these stump-to-mill experts don’t stop until they have their clients land site-prepped and ready to replant.

“My dad, my brothers and sisters were all born in the house we use for our office and we have relatives living all around us,” Chuck Lulay said of his family operation. “It all started when my great-grandmother, to keep from risking her boys’ lives in the Pennsylvania coal mines put everybody on the train to Oregon. They started a mille, opened a logging camp, split wood and sold it for firewood when lumber wasn’t selling. 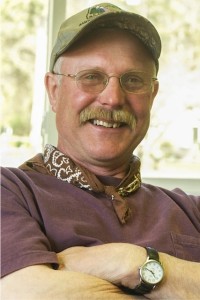 “I didn’t really intend to come back to the family business but while I was at Oregon State getting my Bachelor of Science in forest engineering, I found myself calling home all the time to see how the business was going. I realized then, that I wanted to be there. Since almost all of the family is here, we usually have a five-minute meeting at the end of the day to talk about what we will be doing the next day. It is only when we are all together and talking business around the family dinner table that we sometimes get into trouble.”

Lulay, who is on the administrative council of his church, on the board of directors of Lyons-Mehama Little League, and an active member of the Association of Oregon Loggers is a proponent of Oregon’s Forest Practices Act (FPA). Starting out as the Forest Conservation Act of 1941, it began by requiring reforestation of logged lands. In response to social activism and concerns about the impacts of forest practices beyond reforestation, leaders of the forestry sector (private and public) began to develop the nation’s first comprehensive forest practices act in the late 1960s. The Oregon Forest Practices Act of 1971 covered most forest operations and provided protection 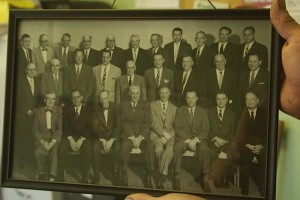 for soil, air, water, fish, and wildlife as well as forest resources.

“Many people have no clue that we in the private sector do such a good job of managing our timber,” Lulay said. “Though many of the regulations have more to do with water than forestry, we would be loathe to lower our standards to the point that allow the disease and fire that plague timberland managed by the forest service. We plant more trees than we cut, provide a full spectrum of wildlife and human habitat and fuel the economy by providing timber-related jobs. Not unlike having your cake and eating it too, it is hard to watch activists protest this industry while living in houses made of wood after they have already eaten their cake.”

Though regulations prohibit it today, Lulay smiles as he remembers riding on the back of his father’s log loader and looks back fondly to the time when his own sons rode along with him. Today, the Lulays, along with colleagues who also share a heritage rich in sustainable forest management, are successfully keeping Oregon forests green.

Passing Up the Money Shot…