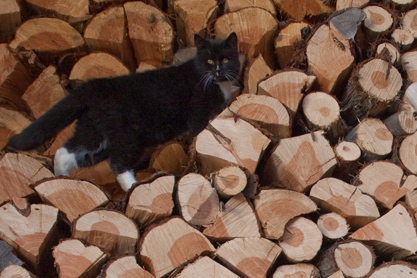 It was the end of a bright and sunny winter day. Night promised to be frigid as the moon rose, and dimmed the light of a gazillion stars. I was toasting my toes by the woodstove when the phone rang:

“I don’t know if you remember me, but, I sold you a couple cords of firewood a few years ago,” a male voice said.

“Sure, I recall that it was good wood.”

“I have three cords of dry, split wood,” he went on. “Do you need any firewood or know anyone who might be interested in a good deal? I’ll sell the whole thing delivered for three hundred dollars.”

“Well, I have my winter wood,” I said, “but I’ll make a few phone calls and see what they say.”

According to Native American legend, each full moon has a name. Mid-winter, when food is especially scarce, it is called the Hunger Moon. Most firewood cutters are familiar with lean times in their seasonal work. They can face hard choices— paying for medication, food, housing or payments on their work vehicle.

Still, I knew this young man’s family – poor and hardscrabble. In a tough business, they made their way the best they could. While they had issues—mostly minor brushes with the law and overly insistent bill collectors—their reputation was one of hard work, fairness and honesty.

Besides, around these parts, that’s a good price for firewood.

Most folks have their wood in by now, but I made some phone calls and left messages. I figured it was a long shot, at best.

“I’m returning your message about firewood,” she said. “Do you suppose it’s still available?”

“No idea,” I said. “But, he wanted to sell it by today—the timing had something to do with the rent on his apartment.”

I gave her his phone number and filled her in on what I knew of the family. Later that evening, I called again to see what happened on her firewood deal—after all, I was willing to share mine if she was in a tight spot.

“It went great,” she reported, “he arrived about dark and dumped the wood in my driveway. He plans on coming back in the morning to stack it.”

Excellent. I thought to myself, that worked well.

Our economy is improving, but especially in rural areas there are far too many people hanging by a financial thread. They live in constant grinding poverty—one breath from disaster, two breaths from the end of their world.

Successfully selling three cords of firewood won’t make or break a cycle of poverty. But, maybe it’ll buy this woodcutter a bit of relief from impending disaster. What’s that worth? I suspect in his world, quite a bit.

Winter can be tough when you’re living on the edge folks – treat each other well.

Bing Bingham is a writer, rancher and storyteller. If you’d like to read more stories about the rural American West, check his blog at… http://bingbingham.com/blog/

Habitat Heroes on the Clatskanie River


Beware the Essence of Billy Goat