Habitat Heroes on the Clatskanie River 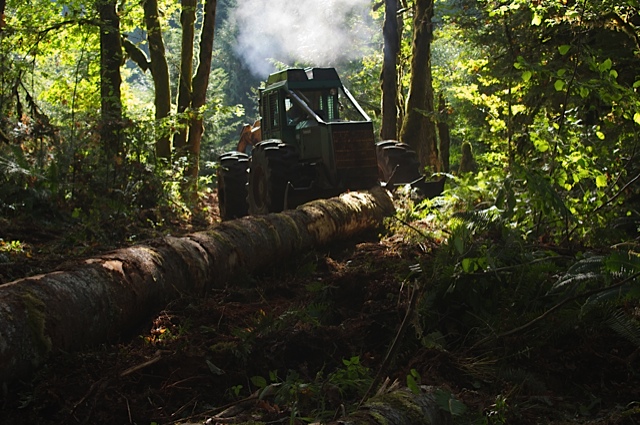 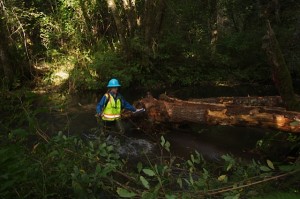 RAINIER, Ore. – Since the Oregon Forest Protection Act of 1971, when stream protection became law, restoration teams have been trying to repair habitat critical to native salmon and steelhead. The project we captured in photos, took place at the headwaters of the Clatskanie River where it runs along Schaffer Road. The players involved were the landowner (who provided the stream), the loggers (who provided the know-how, the equipment and the woody debris) and the watershed council (who partnered with the resource people who provided the engineering skills).

The adult fish in question, swim 50 miles from the ocean up the Columbia River and another 20 miles on to the headwaters of the Clatskanie River, looking for little gravely bottomed pools in which to lay their eggs and places for the hatchings to hide. When Dan Kloppman, owner and president of Nichols Logging, Inc. recognized the lack of spawning habitat along the river where it ran through his property, he appealed to the

“ Kloppman’s project was of particular interest to NRCS because of the high priority salmon habitat along a reach of stream that runs through private timberland,” Gray said. “Our goal was to place 54 pieces of woody debris in the stream in such a way that optimizes stability and ecological benefit.We expect the woody debris will develop pools, riffles, gravel bars and provide baby fish a hiding place from predators.”

The woody debris, included four mature maples, a cedar and some Douglas fir which the landowner felled on site. The root wads were brought in from VanNatta Brothers tree farm. 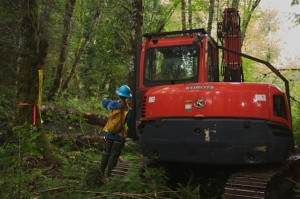 “All o the logs had to be size specific and including the ones with root wads on them,” K.C. VanNatta said. “We both tried to chose trees that for one reason or another were not suitable for commercial harvest. Dan laid down brush so we could access the stream with minimal impact and we were able to do the job without entering the stream. As he pushed each log close to the stream, I placed it according to Gray’s design.”

Starting in 1949, the Oregon Fish Commission began to remove woody debris from streams to allow water to flow freely. The intent was to make better access for fish. Instead, streambeds were scoured to the point of ruining spawning habitat. Because the wood disappeared, the fish had no place to hide. Margaret Magruder, coordinator for LCRWC, is among those who are working toward turning those conditions around.

“We have only begun to implement large wood projects in the Lower Columbia watershed,” Magruder said. “We did one on Carcus Creek but the Kloppman project is the one we will be using as a model and a test. We will monitor this so we can determine how best to implement these projects to achieve the goals of gravel recruitment and increased stream complexity. We also need to make sure the wood stays in place and that its potential movement does not negatively impact downstream landowners and structures.”

Gray, who grew up in the Seattle area, graduated from Cornell University with an undergraduate degree in Civil and Environmental Engineering and a master’s in Environmental Fluid Mechanics and Hydrology, is happy to be back in the Pacific Northwest and thrilled to be doing this kind of work.

“This was my first experience working with loggers and I must say I was blown away by the skill level of Dan and K.C. handling their equipment and how they were able to do it while making such little impact,” Gray said. “Weaving 60-foot logs between standing trees was like threading them through the eye of a needle, but K.C. did it. These guys are used to protecting what needs to be protected every day and I was lucky to have them on my team for this project.”