The House That Friends Built on Devils Lake… 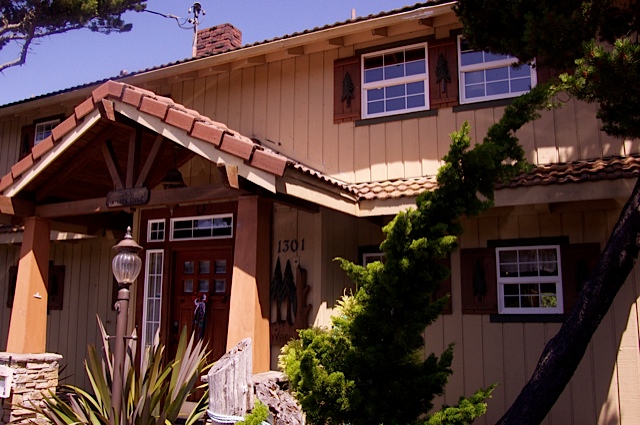 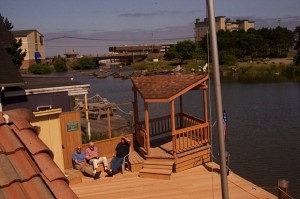 Visiting on the Dunlap Lodge deck in full sight of Devils Lake, D River and the Pacific Ocean; photo by Jan Jackson

LINCOLN CITY, Ore. – From nearly anywhere inside Dunlap Lakeside Lodge, you can get a close-up look at Devils Lake. If you go out on the deck, you can see where the lake spills into the 120-foot long D River (the shortest in the word) and you can also see D Lake Wayside where the river spills into into the Pacific Ocean.

On New Years Eve day 1963, good friends Betty and the late Marvin Lowen, Jackie and Marv Dalke, Joan and Leo Wahl and Esther and Dave Loewen (no relation) piled in the car and drove to Lincoln City to look for a perfect place to go together and build themselves a vacation lodge. The friends from Kingwood Bible Church in West Salem found their perfect place on the lake, near the river and near the ocean. They built Dunlap Lakeside Lodge (so named because they always ate so much when they were there that their stomachs lapped over their belts). Still together, on July 7, 2013, the couples hosted a 50th anniversary party and invited all their friends. 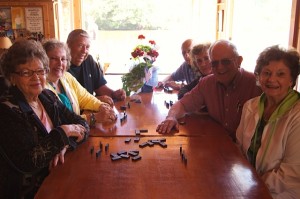 “We wanted the lodge to be big enough for all of us and our young children, on a site we could afford, located where we could be on the lake but still walk to the beach,” Betty Lowen said.

“We all fell in love with the lot and talked the seller into holding it for us with the $20 bill that Leo Wahl happen to have on him (that gave us time to get back to Salem and get some more money). We didn’t have much time that day anyway because we wanted to make it back to Salem in time to attend a New Years Eve party at the church. We were so excited about the whole thing that the rest of congregation figured they would never see us in church again because we would be spending all of our time a the beach. We proved them wrong.”

The success of building Dunlap Lakeside Lodge came down to one man – the late Marvin Lowen. An expert building contractor and skilled teacher, he was able to explain what his less talented helpers needed to do before he could begin to put everyone to work. 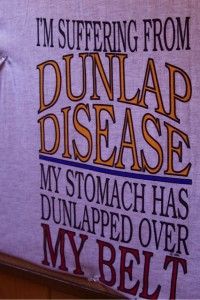 “None of us knew what to do except Marv,” Betty said of her late husband. “Marv Dalke worked for Pacific Road and Driveway, David Loewen worked in the shipping department at Boise Cascade, and Leo Wahl worked for the telephone company and none of the wives had building experience,so he had to teach us all. The women did a lot of odd jobs plus we stapled all the insulation with staple guns and believe you me, before the six months were over, we all knew a lot about building houses. We worked hard, we played hard and we still did it all without even having an argument.”

The couples built the lodge in six months and are still together, though now they also rent the vacation abode out to the public.

Devils Lake is a 1/3-mile wide by 3-mile long lake on the east side of Lincoln City that is stocked with sterile Chinese grass carp to keep it from becoming choked with grasses. According to Oregon Geographic Names, the lake derives its name from a Native American legend about a large marine creature that would occasionally surface. Because the couples loved to fish, swim, boat and water ski, the location was perfect.

“Our children grew up here and now their friends and their children are enjoying it,” Betty said. “Mark, was only two when we moved in, so he spent a lot of time tethered to a tree next to the deck to make sure he didn’t fall in the water. We had to cut that tree down when we expanded the deck and Mark jumped at the chance to be the one to do it.”

Though the other three families sold out their interest in Dunlap Lakeside Lodge to Marv and Betty Lowen and new partners Glenn and Arlene Pfau in 1974, the original group still get together.

“We’ve had some great times in this place and when we get together we bring them all up.”

At the anniversary party, Leo was presented with an arm of a sofa the band of friends lost off a trailer going 70-miles an hour on one of their rush trips back to Salem. It flew across all lanes before landing in a pasture off the road.

“All we ended up with was the arm so hid it for 50 years, we had it inscribed for him, and gave it to him at the party,” Betty said.

You can find out more about the fascinating Dunlap Lodge by visiting www.Dunlaplodge.com.