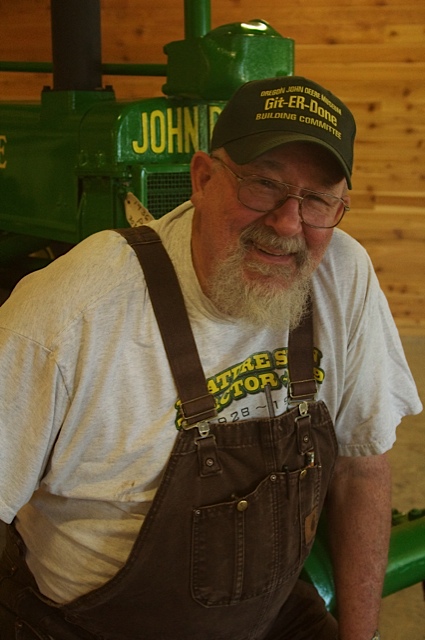 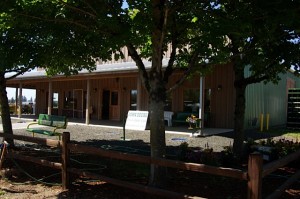 Brooks, Ore. – On July 27, 2013, the Oregon 2-Cylinder John Deere Tractor Club celebrated the opening of a 1930/1940s styled John Deere Dealership Museum. The 4500-square-foot building (plus a 1500 square foot porch) has an authentic vintage showroom that holds restored John Deere tractors, a repair shop filled with antique farm equipment in need of repair and a parts room and showcase stocked with memorabilia. It also has a gift shop, a meeting room, a library, tools, pictures and historical documents on local John Deere dealerships and distribution centers.

The museum project, which was launched in 2004 with a club member vote of 49 to one, was the dream of founding 2-Cylinder Club member Vickey Winn.

“It is a continuing story and much bigger than we ever dreamed it would be,” Winn said. “We started talking about it in 2003 and here we are opening one of the largest John Deere displays on the West Coast. We didn’t even have to get any grants – did it all through donations, gifts and fundraisers. I’m just in awe.”

After six years of membership-supported fundraising (including selling thousands of root beer floats), the group had raised the $80,000 it needed to start. Club member Doug Stoller, a retired West Salem builder/fabricator/cabinet maker/jack-of-all trades, carefully picked crew of fellow club member/experts and spent the next four years building it.

“It was during the first club meeting I ever attended that the museum idea came up for a vote,” Stoller said. “However, what I didn’t know then was that I would volunteer to build it. Because we thought we would be applying for grants, I started keeping track of time and miles. Now four years, 6,300 hours and 35,000-plus miles on three vehicles later, I’m back home ready to plant a garden for the first time in three years. The up-side is that getting to build that building was an opportunity not many people have and though I’m glad its over, I’m glad I did it.” 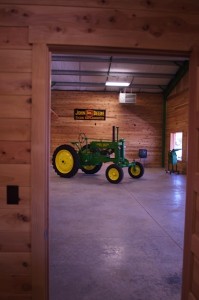 On temporary display is one of 303 two-cylinder1936 John Deere AWs owned by Bob and Judy Gauntt of Vancouver, Washington; photo by Jan Jackson

When Stoller volunteered to build the museum, he did it under one condition – that the project wouldn’t be micro-managed. First he chose three skilled building committee members and then gifted them with building committee hats that said “Git-er done.”  Members, friends and neighbors were among those who donated Douglas fir and cedar trees. The trees were then milled on a portable mill, dried and graded inside the metal portion of the museum.

“We had our first committee meeting in March, 2009,” Stoller said. “Club member Terry Westwood drew up the original draft, an architect from Silverton made the blueprints, and by July, the Antique Powerland Museums Association granted us our land use/ lease permit. We poured the foundation in January 2010.

“What followed next was a series of problem solving events like replacing overhead doors with handmade wooden ones, building windows that would work in a board and bat structure and fabricating the hardware to make it all work.  I still wouldn’t trade the experience for anything and it is going to be pretty nice when we get to wear those hats that say “Got-er done.”