Taking Toastmasters into the streets… 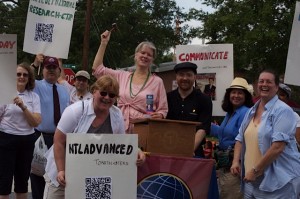 GREENBELT, MD – The vision to have a Toastmaster presence in the Greenbelt MD Labor Day Parade finally became a reality when Oregon native David Alexander led his club through his town in a rolling meeting. While thousands of parade watchers looked on from their seats along the parade route, club members gave speeches, evaluations and table topics  along the way. The grand finale was Mike Rilee’s champagne-like toast to the dignitaries and judges in the reviewing stands at the end of the parade route. 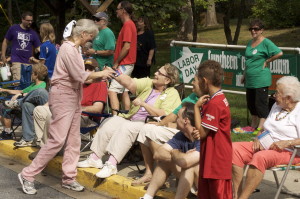 “Every year I would watch the parade and say, ‘We ought to be out there,’ said David Alexander, a Distinguished Toastmaster who lives in Greenbelt. “But, I had to give a lot of thought to just how we could do it. One problem was how to interact with our audience. Toastmasters know that it is important to get as close to the audience as practical and with a classic truck-bed float, we wouldn’t be able to. We had to find a way to work in this novel space and still keep the separation between our audience and us to a minimum.

“Then, about a year ago, while walking through a warehouse, I spotted a hand pulled pallet jack (a contraption on wheels designed to hold and easily pull a lot of weight). A light bulb went on over my head and I said to myself, ‘I know what we could do with that.’” 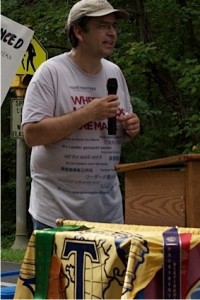 Alexander, approached members in the newly rejuvenated Greenbelt Toastmasters as well as those in the more established NTL Advanced Club and they quickly became as excited as he was. The committee set about to make it happen.

“What I spent four years thinking about, my action team and I accomplished in four months,” Alexander said.

“We built the platform so we could take it apart and easily store the pieces,” Alexander said. “We used three-quarter-inch plywood for the base and attached a stand that we could use to display the banner and hold a portable lectern that faced a group of Toastmasters, clad in Toastmaster labeled shirts and hats, marching behind us. We then conducted mini-meetings that each included a speech, some table topics and an evaluation and then switched roles for the next set. Those speaking used a portable sound system with wireless microphones and the marching members carried placards that included Communicate, Listen, Evaluate and Join tag-lines.”

Heady with the success of their first parade venture, members of both clubs are already thinking about how they are going to do it next year.

“We had a lot of fun seeing and speaking to the parade watchers,” said Mike Rilee, District 36 Governor. “It was like everyone along our parade route was a guest at some point of our meeting. And thanks to Toastmasters, the first toast I’ve ever led in my life was in public to thousands of good people in Greenbelt!”

In the meantime, Alexander and his committee encourage everyone to participate in your own hometown parade. Dvid Alexander says it’s easy to take your message to the streets.

Growing the Unusual in the Willamette Valley


Maximillion and His Bully Frog Gang…