Growing the Unusual in the Willamette Valley 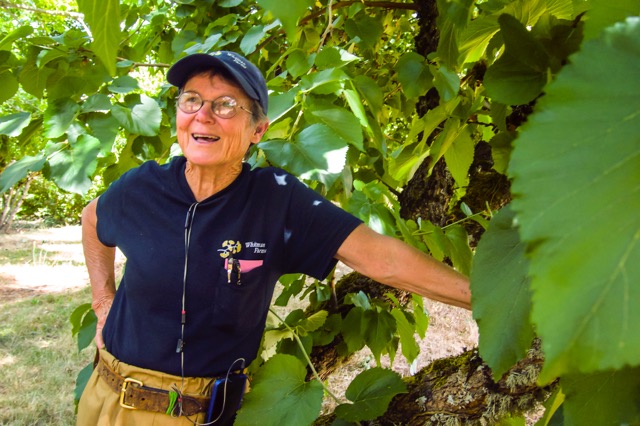 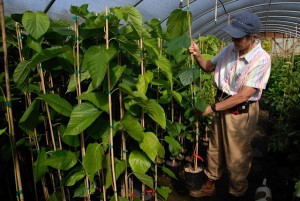 SALEM, OR – Lucile Whitman, had no real farm experience in 1980 when she and her former husband bought a run down 35-acre hazelnut orchard in West Salem. Today, she operates a wholesale/retail nursery that sells old world red and black currants, gooseberries, elderberries, mulberries, kiwi, pawpaw, figs, persimmons and other unusual and hard-to-find trees and shrubs. Whitman picks the seeds, grows and grafts the under-stock, plants them in the field to grow out and ships them to nurseries and individuals all over the United States.

“I was born and raised on a small hobby farm outside Atlanta Georgia and I spent my growing up years making sure I didn’t get my hands dirty,” Whitman said of her non- agricultural youth.  “My husband and I came to Salem so he could practice medicine and since I had a doctorate in Latin and Greek, I thought I could teach at schools like Willamette University. When I got here however, I found that schools like Willamette didn’t teach Latin and Greek. So, we bought this place to keep me busy; since I barely knew the difference between a pine tree and a dogwood, I signed up for how-to-farm classes Chemeketa Community College, asked for a chain saw for Christmas and set to work on this place.”

Whitman credits her neighbor/nurseryman Don Meyer (Meyer’s Nursery) for teaching her about the nursery business and an arborist for the City of Salem for spawning her interest in unusual plants and trees. When she first went to work for Meyer, she sold flowering cherries, flowering plums and Norway maples for him. One of the places she called on was the City of Salem but Alan Munn, the arborist in charge of purchasing, was more interested in unusual varieties trees and plants. He did offer however, to meet Lucile downtown on Saturdays and walk through the neighborhoods so she could see the kinds of trees and plants he was talking about. Those Saturdays got her thinking along an entirely different direction and she has continued in that direction since. 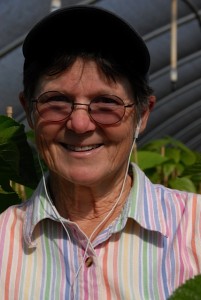 With a doctorate in Latin and Greek Studies, Lucille Whitman enrolled in classes to learn how to grow things; photo by Jan Jackson.

Especially when they are bearing fruit, it is fun to browse through Whitman’s tree and plant beds because she has you nibbling on this and that – tasting things you never heard of before. For a short period of time, she grew currants for fresh market but found that wasn’t the part of the business she cared for. She does however, enjoy getting the occasional call from frantic class room teachers looking for fresh mulberry leaves to feed the students silk worms. Unlike in the past when the wrong kind of mulberry trees that were imported as silkworm food to Great Britain (and all of the silkworms died), Whitman knows the difference between the less hardy Morus nigra that produces the tastiest fruit and the hardier Morus alba that nourishes the silk worm.

Though she puts in long hours seven days a week, Whitman claims that the search for strange plants and the growing of things like golden, purple and variegated catalpas and 150 cultivars of Japanese maples that keeps a smile on her face.

“It isn’t just that I search out strange plants though I do seem to have a nose for the unusual,” Whitman said. “If you grow gooseberries, people single you out as being interested in growing anything. They come from everywhere wondering if I wouldn’t be interested in growing this or that and all that propagating, potting, growing out and shipping makes me happy.

Oregon Has But One Native Vulture…


Taking Toastmasters into the streets…