Escape to the Bijou Theater in Lincoln City 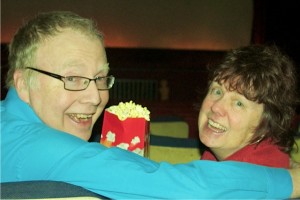 Enjoying ownership of the Bijou Theatre in Lincoln City, Oregon, Keith and Altomare never tire of movies and the people that come to see them; photo by Jan Jackson.

LINCOLN CITY, Or. – Seeing first run movies, occasional classics and matinees every day of the year in a historic small town movie theatre, is just an every day occurrence for movie buffs Betsy and Keith Altomare. Remaining enamored with movies after buying and operating the Bijou 16 years ago, the Altomares still think their historic 75-year old theatre is the best escape place on the Oregon Coast.

“We were both in the music business in Los Angeles when Keith and I decided we had endured more than enough LA earthquakes, fires, flooding and riots,” Betsy said. “ We also wanted to find a place where we could connect with the community and raise our baby daughter.”

Keith, who also manages some music groups and is a DJ two hours a day, had narrowed possible business ventures down to opening a cheese shop or buying a movie theatre. 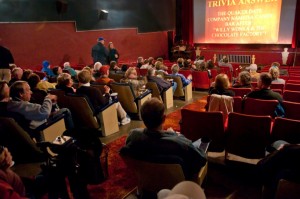 “When I got excited about the movie theatre option, we started shopping,” Betsy said. “We found one in Champaign, Illinois; Angel Camp, California; Taos, New Mexico and Lincoln City, Oregon and we chose Lincoln City. That was in 1996 and we continue to enjoy personally going down in front at all of the evening shows to greet the crowd.”

Though both Altomares share ownership and Keith does many of the behind- the-scenes work, Betsy is the one that runs the Bijou. She picks the movies to show, hires and manages the staff, and stages the community and special events.

“I research the movies that are coming out, read the reviews, attend screenings when I can and talking to our customers about what movies they want to see,” Betsy said. “It turns out to be a mix of what we know, what we want and what we think will do well. There are four of us who can run the projector, including our daughter Molly, who has been doing it since she was 11.

“Mac Pimintel plays the organ on Mondays at 1:30 pm before the 2 pm show (free with the price of a ticket to the matinee). A group of men and women who meet socially in the lobby at 10:30 every Wednesday morning, holds trivia playoffs afterwards (everyone is invited). We also sell movie posters, cards and used books and sometimes people just stop by and buy a bag of popcorn.”

According to history, William McKevitt and his family opened what was then called the Lakeside Theatre, on June 3, 1937. The first film shown was, Personal Property, starring Jean Harlow and Robert Taylor. Admission was 35-cents for adults and 10-cents for children. After World War II, William’s son Robert took over the operation and by 1950 had updated the place with public lounges/restrooms, a new projection booth and one of the first cry-rooms on the Oregon coast. The theatre operated until 1979, was closed for two years, and, in 1981, reopened as the Bijou under the ownership of Judy Mace.

Keith and Betsy, who rode in last year’s Glen Eden Fourth of July Parade as Business of the Year, both like the connection the theatre allows them to make with the community.

“We love to be a place where people can escape, even if it is only for an hour or two,” Keith said. “When you watch To Rome With Love, the wonderful world of cinematography takes you to Rome. For us, it’s about the movies and the people who come here to watch them.”

For more information on the Bijou Theatre, visit www. cinemalovers.com.