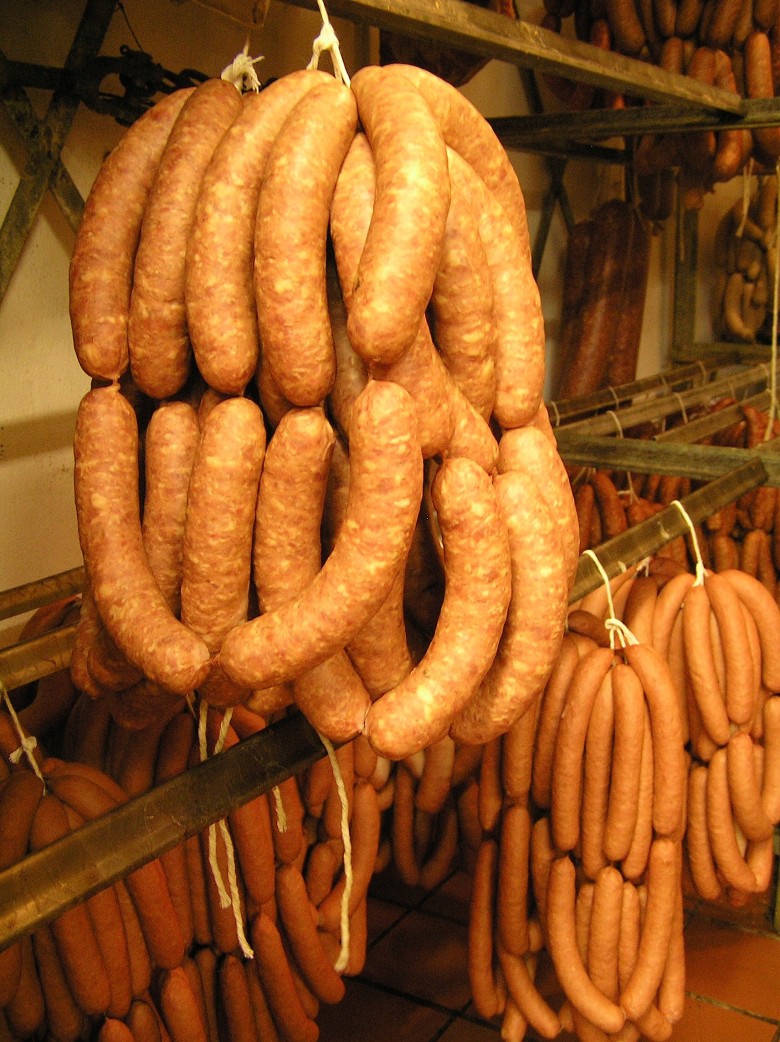 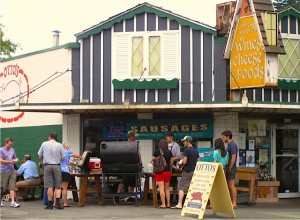 In addition to buying fresh made sausage and every other type of meat imaginable in the meat market, Otto’s does a brisk business at it’s in-store deli and at the sidewalk barbecue, where the chefs cook freshly made sausages from 11 a.m. to 6 p.m. for customers to enjoy at picnic tables set up on the wide sidewalks along the building. Photo by Ed Merriman

Walking into Otto’s Sausage Kitchen in Portland’s Woodstock neighborhood is like taking a step back in time to the days when nearly every town had a local meat market where the owners took pride in securing and cutting the finest beef, pork and poultry raised on nearby farms.

Instead of stopping at fast food chains where the food is the same wherever you go, hometown meat markets are sought out by travelers who savored the local flavors of old-fashion wieners, sausage, smoked ham or beef brisket, pastrami, corned beef, pepperoni sticks and jerky made from recipes handed down in families for generations. Otto’s Sausage Kitchen is that kind of hometown meat market.

“I think what makes us unique is we still make sausage the way my grandfather made it, from the old recipes he brought with him from Germany,” said Jerry Eichentopf, grandson of founder Otto Eichentopf.

With Oktoberfest parties and community celebrations like the Mount Angel Oktoberfest, October is a busy month with a big surge in online and mail order business. But the bulk of their sales are still comprised of local customers, many of whom have been buying meat from Otto’s Sausage Kitchen for decades.

“We have customers who started coming here shopping with their parents in the 1930s and 40s,” said Gretchen Eichentopf. 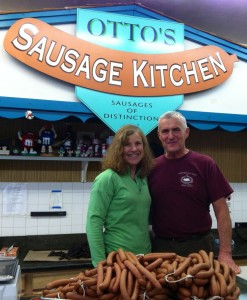 In fact, she said, some of their old-time customers shared their family recipes for specialty sausages with Otto’s. The result is Swedish Potato Sausage, British Bangers, Danish Midisterpolse, and their newest addition, Boerwohers made with coriander, beef and red wine vinegar from Portland. We make sausage the way our family has always made sausage, with all natural beef, pork and chicken with no fillers. All the flavor comes from the meats, from our special way of smoking the meat, and from quality spices.”

For going on four generations, Otto’s Sausage Kitchen has been buying beef and pork grown in Oregon from Carlton Farms, and their chicken also is grown in the Northwest and purchased from Draper Valley Natural.

In addition to selling fresh made sausage and every other type of meat imaginable in the meat market, Otto’s does a brisk business seven days a week at its in-store deli and at the sidewalk barbecue, where the chefs cook freshly made sausages from 11 a.m. to 6 p.m. for customers to enjoy at picnic tables set up on the wide sidewalks along the building.

While the sidewalk barbecue features chicken and pork sausage, beer sausage and Otto’s old-fashioned wieners, other varieties of Otto’s own sausages include Tuscan, Chorizo, Italian, Kielbasas, Bratwurst and many others.

There’s plenty of seating in the deli section of the store as well, where customers can order from a wide selection of hot or cold sandwiches, soups and salads, along with beers and wines made in the Northwest or imported from countries with beer brewing traditions such as Germany, Holland and Ireland. 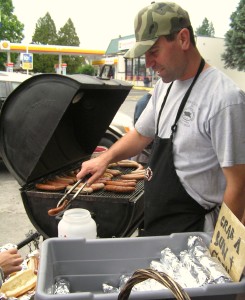 Otto Eichentopf founded Otto’s Sausage Kitchen in 1922. He operated it with his wife, Selma, until the mid-1940s. Their son Edwin and his wife Eleanor took over after World War II and continued to run Otto’s Sausage Kitchen until 1983, when their son Jerry Eichentopf and his wife, Gretchen took over. Now three of their daughters – Christie (and husband Kevin), Heidi (and husband Justin) and Bereka are all working at the family business, just like their parents, grandparents and great grandparents did.

Jerry Eichentopf, 57, was 12 years old when he started working in the family’s grocery store and meat market purchased by his grandfather Otto in what was a predominantly German neighborhood in 1922.

“I started out sweeping and mopping floors and now I am president of the whole company. I’m also the head sausage maker,” said Eichentopf.

Otto came to America before World War I to start a new life, according to Jerry wife Gretchen, who came to work at the meat market in 1974, married Jerry in 1976 and has shared the work of smoking meat, making sausages and running the business for nearly 40 years.

Gretchen, said Otto actually opened his first meat market in Aberdeen, Wash., but the anti-German sentiment there became so hostile during World War I that he was forced to close his shop and look for a new locale more friendly to German immigrants.

“We were looking through some boxes of old papers the other day and came across the canceled check my grandfather wrote when he purchased the Reed Market in September 1922,” Jerry said.

According to the family history, Otto immigrated to the United States from Germany in 1909. He came to escape the aristocratic ruling families that levied such high rents and taxes that working class families had little opportunity to fulfill their dreams of a better life. From the moment he laid eyes on the Statue of Liberty and entered the United States through New York’s Ellis Island, Otto worked his way up in meat markets and grocery stores across the United States and Canada.

It took a little over 12 years for Otto to realize his dream. Originally Otto operated the meat market as an integral part of his Reed Market grocery store, but when the big supermarket chains like Albertsons and Safeway spread across the country in the 1930s, Otto saw the handwriting on the wall and in 1937, he closed Reed Market at 46th and Woodstock. He kept the meat market going as Otto’s Sausage Kitchen at a new, smaller location on the corner of 43rd and Woodstock. That decision turned out to be the right one, and the Eichentopf family has successfully operated Otto’s Sausage Kitchen at the same location for four generations.


Escape to the Bijou Theater in Lincoln City