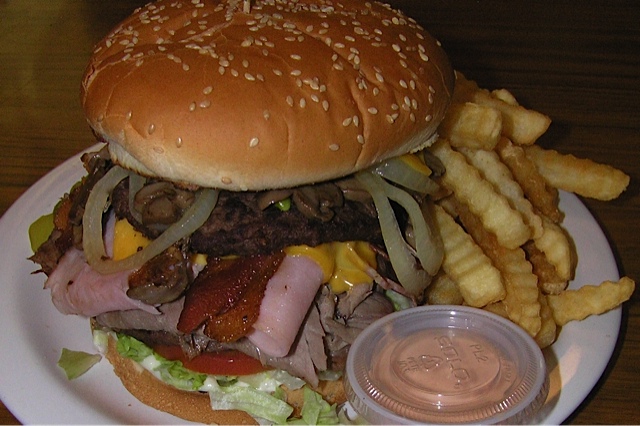 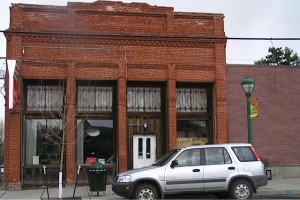 The Long Branch Café and Saloon, out in Eastern Oregon past the world famous Round-up City of Pendleton, is a back roads western adventure you won’t want to miss. Owned by Bernice Charlton, the Long Branch started out as a mercantile built in 1874, and the cafe still occupies the original red brick historic building. Inside, the cafe atmosphere is partly mountain lodge, with taxidermy bear, coyote and bobcat, mounted elk and deer busts, pheasants, grouse and other wild animals. But the walls are also lined with memorabilia reminiscent of its mercantile days, including a vast display of antique saltshakers, bottles and glass figurines.

While the Town Marshall’s Office is just across and down the street, visitors will find big Marshal Dillon at the Long Branch.  No, it’s not Marshall Dillon from the long-running Western television series Gun Smoke. The Long Branch’s Marshall Dillon hamburger has a reputation for being one of the biggest, best tasting burgers in the West. It features two one-half pound beef patties, topped with bacon, sliced ham, generous mound of sliced beef with grilled onions, grilled mushrooms, aujus , with lettuce, tomato, pickles and special sauce.

“We get a lot of couples who come in and order the Marshall Dillon to split, and even then they ask for a box to take home the leftovers,” Charlton said. 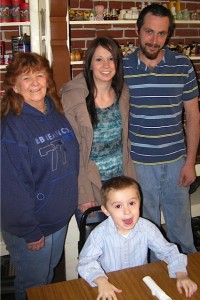 Recently Charlton’s daughter Shylee Welch and her husband Chris Welch, who is retiring from a career as a commercial fisherman and member of the cast of fishermen appearing on the Deadliest Catch television show that documents the lives and daily activities of real working fishermen off the coast of Alaska.

The Welch’s son Micah, 4, is already chomping at the bit to help out in the cafe. In fact, he sometimes walks around with a white napkin draped over his arm pretending to wait on tables.

By the way, if the Marshall Dillon burger is too much, try the Shorthorn with ham and bacon, or Charlton’s favorite – the Wyatt Earp, which is like a French dip sandwich with thin-sliced roast beef piled high, but with an extra twist of Swiss cheese, grilled onions, along with homemade aujus.

The Long Branch is also famous for its Cowboy Breakfast, which features local sausage, ham and other meats from Hill Meat Co. in Pendleton.

In the saloon, the dance floor’s got plenty of room for boot scootin, and weekend music ranges from live country western bands to rock bands and Karoake.