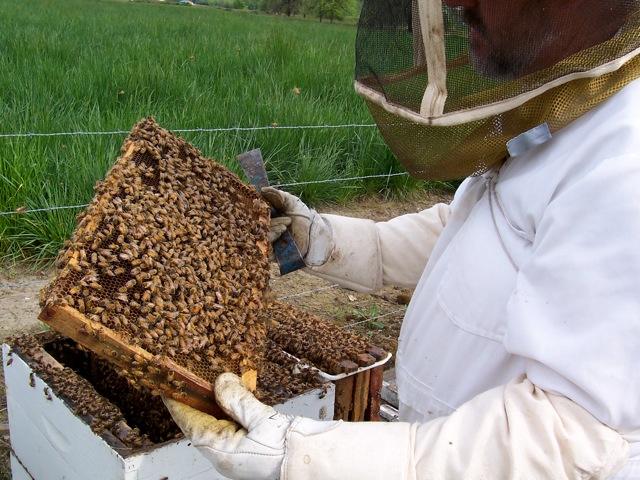 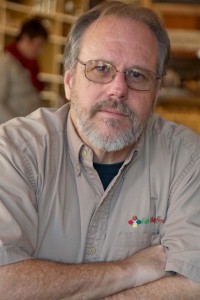 Mark Thompson, owner/operator of Fair Wage Coffee, is a bee keeper for the love of bees; photo by Jan Jackson

SILVERTON, Ore. – When Oregon Garden horticulturist Jeff Para came up with the idea of adding a permanent bee colony to the Oregon Garden, Dundee beekeeper Mark Thompson made it happen. This spring will mark the third season that Thompson’s honeybees will pollinate the flowers in the 80-acre botanical garden.

In addition to pollinating the flowers, these now resident bees are a popular subject of garden-sponsored educational workshops, while producing natural Oregon Garden honey to sell in the gift shop. Though the bees reside in the Garden’s oak grove, their hives are placed far enough away from visitors to provide them a stress-free environment.

Thompson, whose day-job is owning and operating a coffee roasting business in Dundee, graduated from George Fox College with a degree in Communication Arts, Christian Education and Physical Education.

While visiting an elderly member of his church who was recovering from a heart attack, Thompson uttered the one little word that propelled him into the bee business.

“I still can’t believe I agreed to do something I knew nothing about,” Thompson said recalling the day he yelled ‘NO’ when lifelong beekeeper Eldon Havaman said he was going to have to give up his bees.

“Eldon was not only a retired bee inspector for the State of Oregon, but had spent his life raising bees. He was so depressed about his future that when he said he was going to have to give them up, I heard myself  assuring him that he wouldn’t have to.

“I remember telling him that if he would be the brain, I would be the brawn and between the two of us we could make it happen. Keeping my fear of being stung to myself, I showed up at his place a few weeks later and donned Eldon’s old suit, veil and gloves.

“He sat on a box and told me what to do. After the first year, my focus began to mature from thinking only about what was going on inside the veil to what was going on inside the hive. By the end of the third year, I asked him if I could add a hive of my own and the fourth year I added another and then another. We worked the bees together for several years and when he died, I bought them all.” 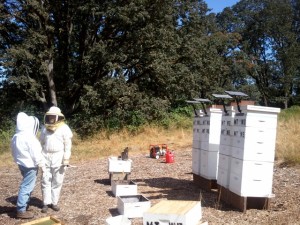 Mark Thompson and his wife tend the four solar cooled honeybee hives in the Oak Grove at the Oregon Garden in Silverton, Oregon; photo courtesy of Mark Thompson.

In addition to driving the 40-plus miles from Dundee to Silverton to manage his hives, Thompson also conducts an occasional public education workshop for Oregon Garden.

“I love talking about the bees and I always give examples about how sophisticated and smart they are,” Thompson said. “Over the years I’ve watched them head for a field that had just been sprayed, detect something was wrong, pass the word to their fellow bees and redirect themselves to another field. They seem to have a sixth sense about what is and is not good for them. Of course, the Oregon Garden is a perfect place for them because they are secluded in the oak grove in solar cooled hives in their own spray-free garden.”

Though bees seal themselves in their hives and stay dormant during the winter, Thompson continues to check them regularly for mites and protect them from yellow jackets, mice, bears, skunks and other predators.

“They do a pretty good job of taking care of themselves, but I’m still there to help them out when they need it,” Thompson said.  “Some beekeepers don’t like solar hives but the fact that honey production as increased 30 percent since we started using them and the fact that they don’t leave, tells me the bees are happy. The program seems to be good for the garden, its good for the bees and its good for the people who visit.