There’s a Covered Bridge for You in Oregon… 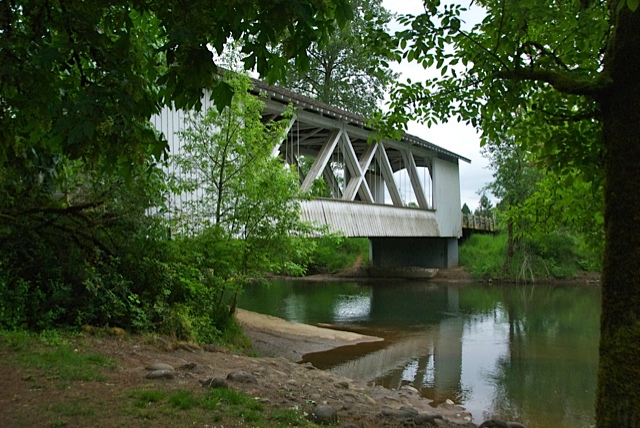 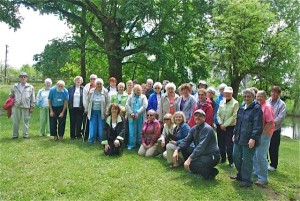 Travelers on a Celestial Travel and Tour Company Tour out of Aurora Colorado pose for a group photo at the Larwood Bridge; photo by Jan Jackson.

SCIO, Ore. – Oregon not only has the largest collection of covered bridges in the West, but one of the largest in the nation. Pulling them off the roadway has preserved some of the bridges. The road has been moved around a few others and a few were dismantled, moved and reconstructed someplace else. The rest remain in use over rivers and streams. All but one of Oregon’s 50 remaining covered bridges (out of 450) can be found west of the Cascades from Lake Oswego in the north to Ashland in the south (one is east of the mountains in Bend). Whether you are a historian, an artist, a photographer or just a romantic covered bridge enthusiast, there is an Oregon covered bridge out there for you.

Covered bridge building in Oregon started in the 1850s with the pioneers and peaked in the early 1900s. Motorcoach tours have been actively touring the ones in Linn County since 1965. One of the most asked questions is why the bridges are covered and many reasons have been offered. Some say the barn-like structures were designed to make the animals feel at home and therefore less likely to shy or stampede when being forced to cross. Other explanations included that the roofs were to keep the snow off the bridge road, to provide shelter to travelers caught in storms or to provide a place to steal kisses without being watched. Except for the Gallon House Bridge, which was used as a place to secretly pass moonshine during prohibition or the Shimanek Bridge that is said to have housed a two-seater toilet, the real reason bridges were covered was to protect the structures from premature rotting from the rain.

Tolls were collected at many of the bridges. One story goes that a particular man was continually found fording the river to keep from paying the toll. His excuse in the summer was that he was only trying to wash off the dust. In the winter he pleaded he was trying to wash off the mud. Tolls ranged from three cents to 25 cents a crossing but a farmer was exempt if he was traveling from one part of his farm to another.

For tour groups (or for anyone on a private drive), five or six bridges can fit nicely into a one-day itinerary. For out-of-state guests, the beauty of the diverse countryside enhances the trip. Driving through groves of hazelnuts, fields of nursery stock, cane berries and row crops are beautiful to the native and visitor alike. Many visitors have not seen hop fields, forest clear cuts, tree farms and fields of sheep guarded by anything from donkeys, llamas or guard dogs that look like sheep themselves. The small towns that can be humdrum to nearby residents, take on a charm to the out-of-state visitor. The rivers and streams are picture-worthy and hometown hospitality and homemade pie that the Lacomb Grange puts out for special groups is hard to find in the big city.

Many things have changed in the more than 45 years since the early tour groups crossed the bridges. In the 60s, the motor coaches were small enough to drive through even though passengers were encouraged to get out and walk through the bridge just for the experience. Today, tour guides have to plan routes carefully because even empty coaches are too heavy to drive across them.

How long will the remaining bridges be here? Forever I hope. Nothing can replace the wonderful sight of them spanning the creeks and rivers in the Willamette Valley farmland. And don’t forget those heavenly summer swimming holes that have formed below them. While the covered bridges add a sense of history and charm to the countryside, they also are a continuing source of tourist’s revenue for the small towns near them. A picnic lunch, a swimming hole and a reminder that the country is still a peaceful place to be, is worth a lot. Enjoy.

To find out where Oregon’s covered bridges are, visit http://www.oregon.com/covered_bridges