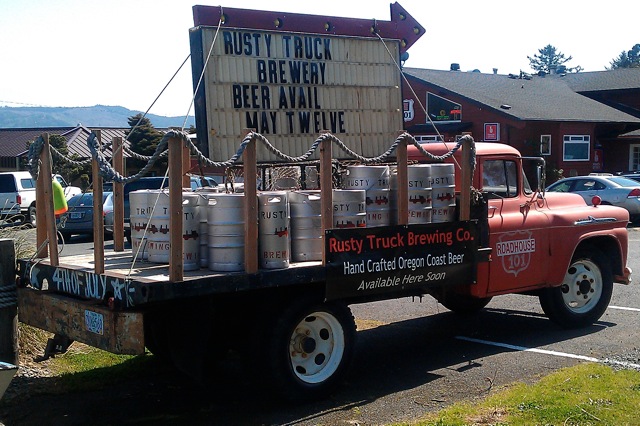 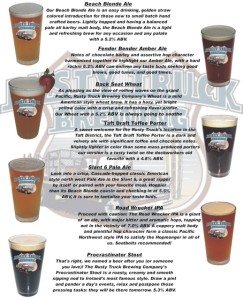 LINCOLN CITY, Ore – In 2005 when Salem attorney Brian Whitehead bought the old Kodiak Bar and Grill, he was looking for something fun to do with his family that would also be good for the people in Lincoln City. He immediately renamed the bar Roadhouse 101, added good food, live blues and classic rock & roll and five years later started adding a state-of-the-arts craft brewery.

Whitehead comes from a long line of bar owners. His grandfather operated a bar in northern Wisconsin and his grandmother grew up in a speakeasy during prohibition and made bathtub gin. Whitehead chose a more conservative path for Rusty Truck Brewing. He waited to expand until the time was right and then hired experienced brewmaster Ron Hulka to help him plan and lay it out. Rusty Truck Brewing held its grand opening July 8 and 9, 2011.

The project also gave the talented brewmaster, who moved to Oregon after seeing a photo of the Three Sisters mountains in Central Oregon, a chance to begin living his dream.

“I was finishing my Liberal Arts Degree (in French and English) near Chicago, and when I saw that photo of those mountains, I knew I had to relocate,” Hulka said of his move west. “I ended up in Eugene where I was introduced to the wonderful Cascade Brewers Society folks and 12 years later I moved to Lincoln City. I could see the potential for a brewery here at the Roadhouse long before Brian was ready, but it has been worth the wait.” 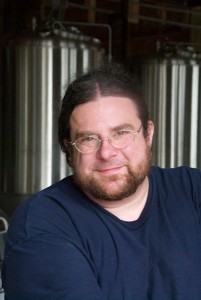 Hulka, a self-described beer nerd who can’t separate himself from his beer making, said his love of beer makes him very particular about the ingredients he uses. He buys only from Northwest suppliers – some as close as Silverton and Hood River. His inspiration for recipes comes to him while walking his dog on the beach. Names for the finished brews like – Fender Bender Amber Ale, Back Seat Wheat, and Procrastination Stout – come from a committee of friends and employees from Roadhouse 101.

“Ron brews a clean, tidy, simple brew and for the first time our beer sales beat liquor sales,” said Mark Huber, sales & distribution manager for Rusty Truck Brewing. “We place our beer in kegs in bars up and down the Oregon Coast. You can find it at the Bay Haven in Newport, Fort Hill Tavern, the Old Oregon and Hebo Inn. Bars and restaurants featuring our beer in Salem include Orupa, Duffys Tavern and Jake’s Bar and Grill. I look forward to increased sales – our beer sells itself.”

“Awards are one thing, but I just want people to like my beer,” Hulka said. “I had a brewing teacher that said your beer is only as good as the last batch you make which is why the challenge never gets old for me. A mentor said, if you can turn a passion into a career, it’s as good as you can get and he was right.”