Kids and art in Paulina 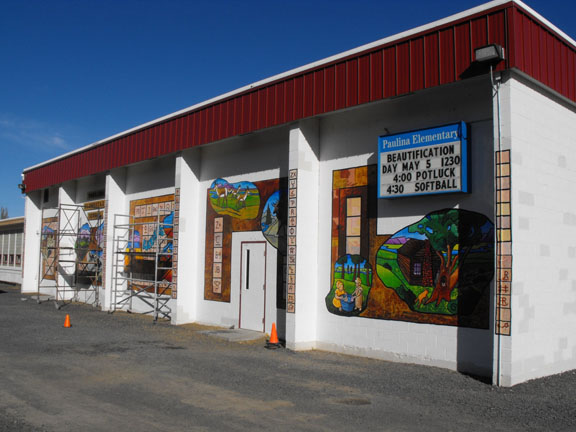 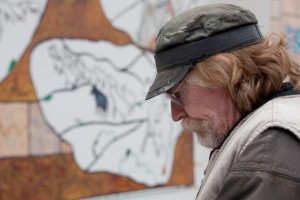 PAULINA, Ore. – As long as Paulina Elementary School stands, so will the bigger-than-life mural its student body painted on the south side of the building. Under the tutelage of world-renowned artist Kenneth J. Wolverton, each of the student body’s 39 kindergarten through eighth grade students helped give life to their community profile in a way the public will enjoy for generations to come.

Dawn Camara, who lives in Paulina near the ranch her great grandfather homesteaded in1913, works part-time as relief postmaster in nearby Post as well as at the school where two of her three children still attend. A ranch wife, Camara is as at home with branding and roping cattle as she is with any of her other jobs. Her involvement in the mural project was not only a labor of love for her community, but for her uncle the artist.

“The idea to paint the wall really started five years ago when teacher Bruce Kilander expressed his thoughts about how a mural would be a good way to make the building look more exciting,” Camara said. “But, until two years ago, when the Skyline Trail Riders Association gave us the proceeds from their local fundraiser auction, we never had the money to do it. One thing led to another and since Uncle Kenny had done projects like this for other schools, I called him to see if he would consider coming from his home in New Mexico to do this one. It was so exciting when he said yes.”

The Paulina Elementary School has a history of coming up with innovative educational experiences for its students. In the past they sponsored an on-site Art Van Go Project, hosted a month-long Artists in Residence program and brought in Oregon Museum of Science and Industry-sponsored chemistry and biology workshops.

To develop the school mural plan, the Parent Teacher Organization members appealed to the community at large to send in ideas and photos of what they wanted to see on the wall. Those ideas were sent to Wolverton to design a mural around and and the resulting scenes brought back to the school board for final approval included cattle brands from nearby ranches; images of grazing cattle; a horse and rider branding; the Paulina rodeo and some scenes from the area’s early pioneer days.

“It was an amazing thing to watch,” Camara said. “On Monday morning, to give the kids a feel for what they were going to do, he gave them a chalk talk workshop in the morning and pastel workshops in the afternoon. The older kids drew a horse and the younger ones a bull. On Tuesday, after he sketched the images on the wall, he rotated the students out of class in small groups of five to eight kids at a time to start painting. The first two days, kindergarten through third graders painted the ground level background. When the younger kids were finished, the fourth and fifth graders took on more mid-range advanced work and the sixth through eighth graders finished off at the top. After the kids did their work, Uncle Kenny went back and did the highlighting and touching up. It’s a thing to behold and if anyone is traveling east of Prineville on Highway 380, I hope they will take a look at it.”

What’s next for Paulina Elementary? It is anybody’s guess. Dawn Camera pointed out that there is a lot of paint left over, they still have some bare walls left and they haven’t ruled anything out.

Making Pies in the Berry Field…