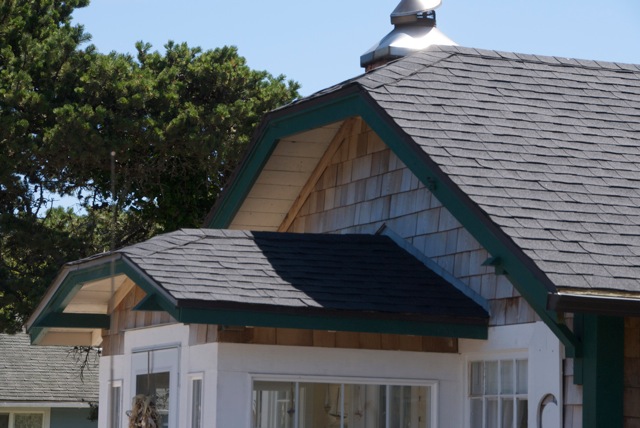 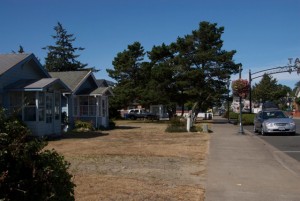 Twelve 1920 vintage Craftsman-style cottages dot both sides of 51st Street in Lincoln City between Highway 101 and the Pacific Ocean. The cottages, built in the early 1900s, are examples of the work of architect brothers Charles Sumner Greene and Henry Mather Greene.

LINCOLN CITY, Ore. – When the 1920’s vintage Craftsman-style tourist cabins were built along Lincoln City’s 51st Street in historic old town Taft, the little structures were part of a world-wide Arts & Craft Movement. Today, their presence is seldom noticed by visitors hurrying to the four-block long collection of shops and restaurants between Highway 101 and the Pacific Ocean.

In a 2001 urban renewal document called Taft: The Transformation of a Waterfront Community to a Resort Town, Steve M. Wyatt sheds some light on these dozen or so sweet little buildings. Long admired by architectural buffs, this long ago street of dreams is also a treat for the casual visitor.

Influenced by the English Arts and Crafts movement, the wide unenclosed eave overhang cottage design came from two California architect brothers Charles Sumner Greene and Henry Mather Greene. The Greenes, who practiced in Pasadena from 1893 to 1914,
Decorative in their own way with matching roof and porch lines, the Craftsman-style cottage was a radically departure from early 1900 design.
began to be featured nationally in such magazines as the Western Architect, The Architect, House Beautiful, Good Housekeeping, Architectural Record, Country Life in America and Ladies’ Home Journal. As a result, a flood of pattern books appeared offering plans for Craftsman bungalows; some even offered completely pre-cut packages of lumber and detailing to be assembled by local labor.

A Field Guide to American Houses, by Virginia & Lee McAlester, defines the Craftsman style as having a low-pitched, gabled roof (occasionally hipped) with wide, unenclosed eave overhangs; roof rafters usually exposed; decorative (false) beams or braces commonly added under gables; and porches, either full-or partial-width. Though modifications and additions have been added to the cabins along 51st Street, the features are still easy to see.

Of the collection on 51st Street, one of the twelve is among the 10% of

51st street cottages between Highway 101 and the Pacific Ocean
Twelve 1920 vintage Craftsman-style cottages dot both sides of 51st Street in Lincoln City between Highway 101 and the Pacific Ocean. The cottages, built in the early 1900s, are examples of the work of architect brothers Charles Sumner Greene and Henry Mather Greene.
Craftsman cottages that have hipped roofs and matching porches while the remaining have the more standard gabled roofline. Classed with Frank Lloyd Wright, who was designing during the same period, elegantly simplified buildings had a profound influence on the beginnings of modernism both here and in Europe.

As these vintage cottages are passed down through the family, rented out or bought and sold to use for homes, studios and commercial shops, their presence brings us back to earlier days. The next time you leave the highway and rush west along 51st Street, I hope you take a little time to admire the old as well as the new.

A Tree Farm Shines in Scio…


The Magic of a Fort in the Woods…