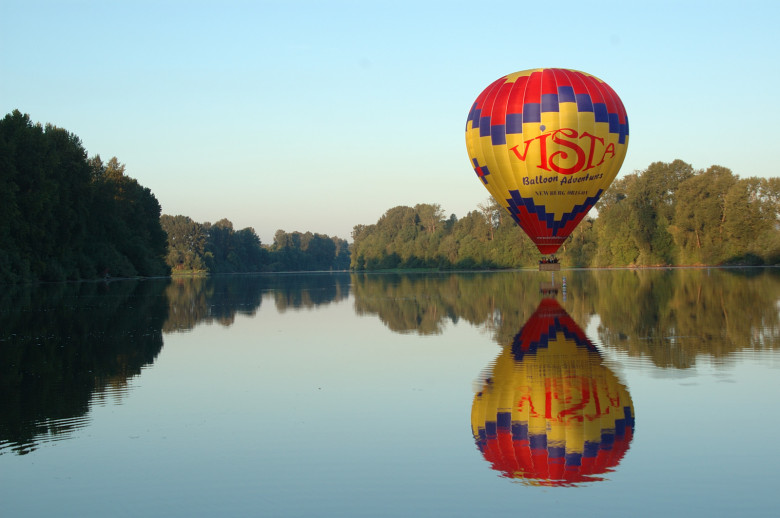 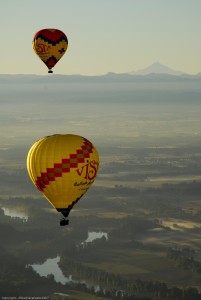 With Mt. Hood on the horizon and the Willamette River below, Vista Balloon Adventures show passengers from all over the world the scenic Yamhill County wine country.

NEWBERG, Ore. – Every good-weather Monday, Wednesday, Friday, weekend and holiday from April 1 through the first week of October, Roger Anderson and Catherine Driver are out of bed well before dawn readying their state-of-the-art hot air balloons.

As happy owners of the largest hot air balloon company in the Northwest, they are doing what they love to do. Roger pilots, Catherine caters the sparkling hot brunches and the husband and wife team share everything else it takes to operate the dream-like flights over beautiful Yamhill County wine country.

Roger, a Pacific Northwest native born in the Seattle area, and Catherine, a native Oregonian, met in Tahiti in 1982. They started out sharing a love of sailing until 1989, when that love switched on to hot air ballooning.

“I was working as a fireman in San Francisco in 1970, when I started building myself a 55-foot three-masted schooner,” Roger said. “I finished it five years later and promptly sailed for Hawaii. At first, I had the idea of carrying passengers but that only lasted two weeks. I sailed 50,000 miles on that boat but for the next 15 years, I spent my working hours on tug boats docking ships in San Francisco Bay and moving barges in Alaska.” 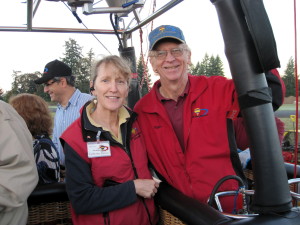 However, when Roger bought a hot air balloon from a guy in Phoenix, the couple began the changeover from sailing on the water to floating in the air. Roger found himself a flight instructor in the yellow pages and signed up for private pilot lessons. Today, he is a licensed commercial pilot.

The first balloon Roger bought “sight unseen,” only carried two passengers. Now the couple has a fleet of seven balloons that carry between six and ten passengers.

“We cater to romantics who like to propose while wafting over the countryside as well as people who like the fun of traveling in small groups,” Roger said.

People find us from all over the world
“When we started Vista Balloon Adventures more than 20 years ago, our passengers came from here in the Portland area and Willamette Valley. As the Internet developed, our market area widened and today people come from all over the world,” Roger added. People like Salvador Brotons, who conducts the Barcelona Spain and the Vancouver Washington Symphony Orchestra and my favorite, Charles Hancock, a 102-year-old war veteran, who was the second man in the world to wear a parachute and flew observation balloons in World War I.”

It doesn’t seem like work
Even after all these years in the business, Roger and Catherine remain undaunted by the hard work involved in operating Vista Balloon Adventures.

“We have 21 years experience now, and every flight is exciting and different from the last. Our reward is flying with a lot of great people and it doesn’t seem like work.”