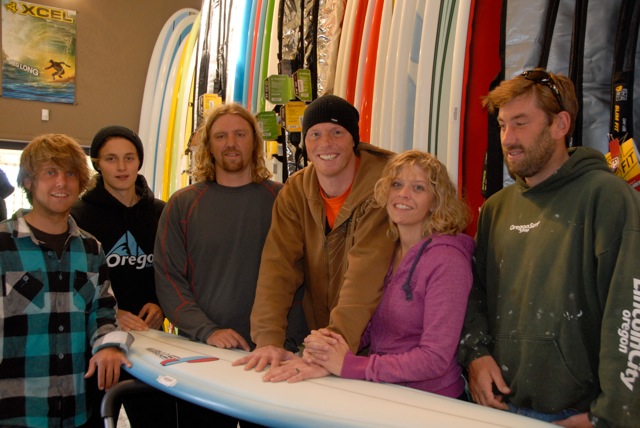 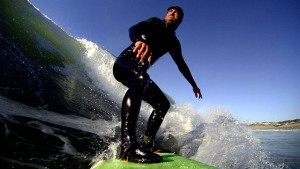 LINCOLN CITY, Ore. Tim Henton wakes up every morning wondering what the surf is doing. The contemplation is both for business and pleasure.

Henton, who was born and raised in Springfield, Oregon, is passionate about surfing. It’s so important a part of his life, although he didn’t get into it until he was 21 years old, that he and his wife Lisa moved to the coast and bought the Oregon Surf Shop.

Perhaps surprisingly, “It took a lot of coaxing to get me to even watch a video on surfing but after I did, I agreed to at least try it,” Henton said. “When I caught that first wave and saw what it was like I was hooked. It wasn’t long until we started hitting the coast every weekend after work.

“I’ve been in construction most of my career and Lisa is a dental assistant. When we found an opportunity for both of us to work at the coast 15 years ago, we jumped at the chance. I continued to work construction, but surfed every chance I got. Lisa and I bought the shop four years ago.

One year later, the couple brought in Ben Colliander to manage the store. He since has become full partner in the business and has spearheaded creating a full service online surf shop at Oregon Surf Shop Com.

Surfing, or the art of wave riding, began 3,000 years ago when Western Polynesian fishermen rode wooden boards to get their catch to shore. It eventually passed from work to pastime and stand-up surfing became the sport we know today. 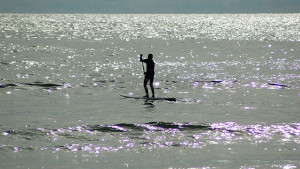 Fun for everyone on the Oregon Coast in Lincoln City; photo courtesy of the Oregon Surf Shop.

Lincoln County History Museum has a few local surfing photos that were taken sometime between 1915 and 1920. Surfing in Oregon however, started to hit its stride about 20 years ago when the wetsuit technology of the early 1950s began leaping forward. Because Nelscott Reef is one of the few spots on the Oregon Coast that can generate quality waves of over 25 feet on the face, Lincoln City is home to the world famous Nelscott Reef Tow-In Classic.

“We have 24-hour rental wet suits, boots, gloves and hoods and after imparting information about the ocean, tides, currents and rip tides, we take even the first time surfer into the water and teach them how to carry, lie, paddle, jump to your feet and take out,” Henton said. “It’s an ocean condition-driven sport, however, and if it something you want to do, you need to be flexible.

“We coach moment by moment and tailor the one-on-one lessons to the individual. You may take lessons with a friend, however, there are no group classes. While lessons are 1 ½ hours, the learner has the gear for 24 hours so they can continue to practice or even get up the next morning and do it again.”

Though surfing is not an easy thing to become proficient at, Henton believes that if it clicks for you, it is one of the most rewarding thing you can do.

“When you ride a mountain, it may change day to day, but, when you ride a wave, it changes second by second as you are riding it,” Henton said. “There is no boat pulling you, no noise and it is quick. From the 40 foot wave to the waist high zipper, there is nothing like it.”