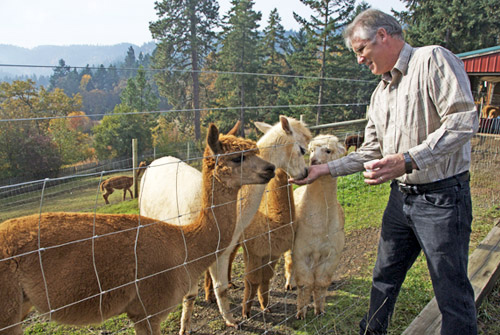 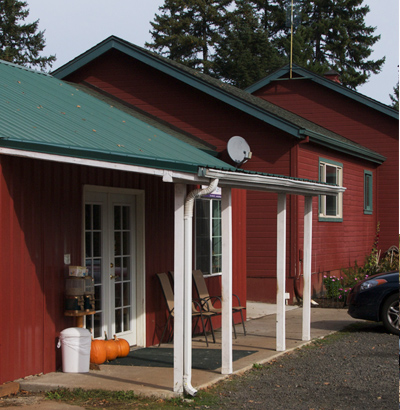 HOOD RIVER, Ore. – If you are curious about alpacas or interested in quality yarn of all kinds, take Highway 35 about nine miles up and out of Hood River and follow the blue signs that lead into the parking lot of Foothills Yarn and Fiber.

In seconds you are greeted by a fence row full of curious but friendly alpacas, shop co-owner Thomas Betts and (if he’s in the mood) a giant slow moving 5-year-old Great Pyrenees guardian-dog named Charlie, who is in charge of the night-time care of the herd.

Born in Portland and raised in Depoe Bay, Betts’ former life as an offshore sailboat racer and producer and seller of maritime products bears no resemblance to his new life in the foothills of the Columbia Gorge. One look around, tells you that Betts is in the perfect place – a place he’s at because of a simple sale of dock line for boats. 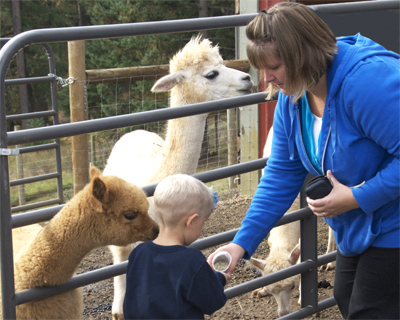 The Dankenbring family drives from The Dalles, to feed the llamas and visit a nearby pumpkin patch.

I retired from racing, sold my business and was working for West Marine in Portland when a guy from Hood River came in and bought dock line to use on his alpacas,” Betts said. “I really didn’t know anything about alpacas, so I went home and told Connie (his wife and business partner) about it, did some research and signed up for some classes on how to raise alpacas.
“To make a long story short, I sold my sailboat, we found a good deal on this farm and we bought our first four little females. We’ve been here now for six years.”

Betts met Connie when they were both students at what was then George Fox College in Newberg. They married in their sophomore year and then transferred to Southern Oregon College of Education where they both majored in education. Though Connie went on to become a teacher and Thomas did not, they both teach visitors and customers about the history of the wonderfully sustainable alpaca. To eager listeners, they explain how they harvest and process the 22 different natural colors of fleece, and between the two of them, they teach people one-on-one how to crochet, knit, weave and spin. 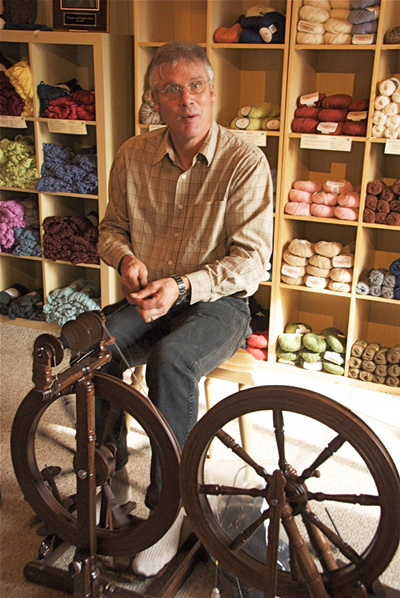 Thomas Betts demonstrates what he calls his therapeutic spinning in the Foothills Yarn and Fiber shop.

“The place needed a lot of work when we bought it,” Betts said. “I took down the old fences and put up new ones, paved the dirt roads, upgraded the barns and turned the three-car garage into a 1,000-square-foot yarn shop. Between our alpacas and the ones I board for other investors, we have about 50 animals here now.”

The Bettses’ belief in sustainability goes hand-in-hand with raising alpacas and harvesting their natural fibers.

“Our pastures are good and alpacas are such good browsers with good digestive systems, they only eat one-half a bale of hay a month per alpaca. While it only costs between $300 and $400 a year to keep an alpaca, I pay $60 a month just to feed my dog.”

Betts said the shop carries the largest selection of alpaca yarn in the gorge, including some specially labeled yarn that comes from his own herd.
“People from all over the world come to Hood River for sports and then come back for fruit or to see our alpaca babies being born,” he added.

For more information on Cascade Alpacas and Foothills Yarn and Fiber, call
Thomas or Connie Betts at 541-354-3542, e-mail them at info@foothillsyarn.com. For address and hours of operation, visit www.foothillsyarn.com.


Columbia Gorge Hotel is Back in Business…