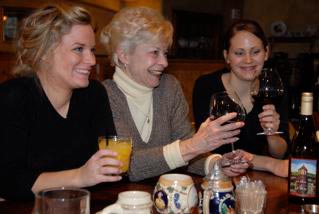 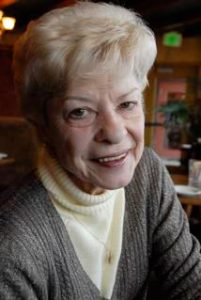 MT. ANGEL, Ore. – To know Henri Dill, is to understand how she could be the one that built Mt. Angel’s monumental downtown chalet-style Edelweiss building with the glockenspiel tower in it. Henri credits the people of Mt. Angel for making it happen, but they know it’s there because she moved back home.

Henri, short for Henrietta, is a second generation Mt. Angel native of Swiss and Bavarian ancestry who friends call a can-do lady. Her father and grandfather were wheel barrowing bricks from the brick yard to the building site in the early 1900s to help build the church that still dominates the town. After traveling the world for 25 years with her career Air Force husband and their five children, the pull of Mt. Angel was strong enough to draw her back.

“I’m not sure where the urge to write came from unless it was from those early days working with my mother at the Benedictine Press,” Henri said. “The writers all worked upstairs which was a place I wasn’t allowed to go. I said to myself, ‘Someday I will be a writer and I will be upstairs.’

“As it turned out, journalism suited me well. I could write and I had a nose for a story and it didn’t matter that I couldn’t spell because journalists had editors who took care of that. I published a military magazine while we were in the service but after 22 years I was tired enough of deadlines that I knew I wanted to do something else.”

Henri moved with the family back to the Mt. Angel farm house where she was born and leased the Mt. Angel building to start what turned out to be Oregon’s first managed antique mall. Within a month Ernie had it painted, Henri had renters for all the stalls and they opened Engelberg’s Antiks. Six months later they opened a second one in downtown Salem. 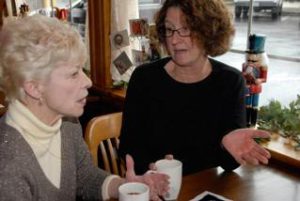 “While Ernie ran the Mt Angel store, I ran the mall in Salem and much like going to work with my mother, our kids (who were school-age by then) came with me. Since then, four grandchildren have been totally raised in the shop and one partially was. This table across from the cash register doubled for years as a changing table and the kitchen has seen years as a playroom. Today, they claim that they used to beg customers to take them home with them and that they had to promise to keep their toys picked up or I would sell them in the shop. Our daughter Lori, son Hank and grandson Taylor still work here.”

Mt. Angel’s Glockenspiel came about when Henri unsuccessfully tried for three years to remodel and earthquake-proof the Mt. Angel Engelberg Antiks building they now owned. The project took seven years start to finish but she kept at it and found a way to tear it down and partner with Marion County Housing to build it up again. Today, crowds of tourists gather at the building’s European style glockenspiel to listen to the music as it’s life-size painted hand-carved wooden figures dance about.
Henri Dill’s reputation as a can-do person

Connie Lauzon, who worked with Henri on the Chamber of Commerce Board of Directors, had nothing but praise for her friend and fellow Mt. Angel volunteer.

“Henri is the kind of person that can dream and when she gets a good idea she doesn’t let anything stop her,” Lauzon said. “When she gets a vision she’s like a dog that gets hold of a bone. She doesn’t turn it loose. She is the most can-do person I’ve ever known and Mt. Angel always benefits.”

Ed Johann – a Legend in His Own Time…