A New Flag for Shaniko 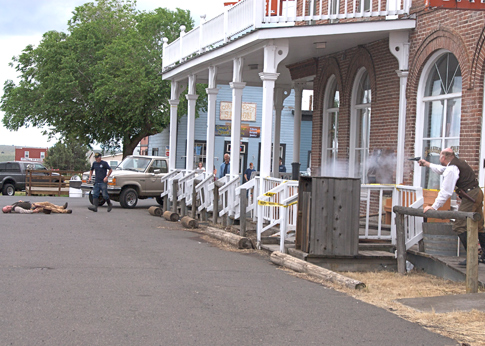 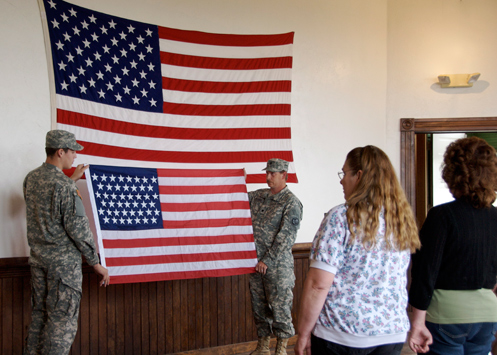 SHANIKO, Ore. – It is an important day in Shaniko when members of the National Guard show up at the old school house at Ghost town of Shaniko Oregon.

“It all started when someone wanted to know how many stars the flag would have had in the 1901 classroom,” Judith Drew, a weaver and docent of the school’s living history wool and weaving displays said. “I used to live in New Mexico and I thought I remembered that some time near the turn of the century New Mexico and Oklahoma were among the last to join the union.

“We recently opened the newly restored school (thanks to some grant money, private funds and a lot of hard work), and as visitors came we started quizzing them. It wasn’t until nearby grass seed farmers Gene and Monica Harris started researching it that we discovered the flag would have had 45 stars. The Harrises became so interested in the project that they had one custom made by an Illinois company that specializes in historic flags and then donated it to the school.”

The ghost town of Shaniko, located on U.S. 97 some 40 miles north of Madras, is a small cluster of historic buildings and shops in the middle of high desert bunchgrass, sagebrush and rock scabs. It was a hub of activity when the Columbia Southern Railroad Company terminated its line there in 1900 and for ten years remained as the transportation and the business center for the wool, wheat, cattle and sheep raised on the surrounding 20,000 square miles of Oregon’s interior. 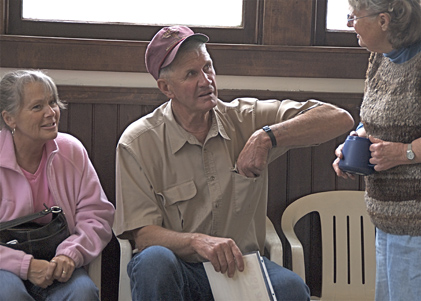 Judith Drew, a weaver and docent at the old Shaniko School House, personally thanks Gene and Monica Harris for having the flag special made and then donating the flag to the school.

Shaniko was named (though dreadfully mispronounced) after German immigrant August Scherneckau who was first postmaster of nearby Cross Hollow (Shaniko’s stage- stop predecessor that closed many years before Shaniko was conceived). The town began its decline in 1911 when another railroad line diverted traffic once served by Columbia Southern. Today, the tourist attraction’s year round residents number fewer than three dozen people.

For information about Shaniko
The school is now open from 9:00 am to 6:00 pm Fridays through Mondays from June through September. In addition to the school room exhibit (still under construction), the educational exhibit room includes the Weaver’s Workshop with antique equipment, wool products, a Sheep to Shawl exhibit, and books. Admission is free. For information on Shaniko’s next big wool event, visit www.shanikowoolgathering.com.