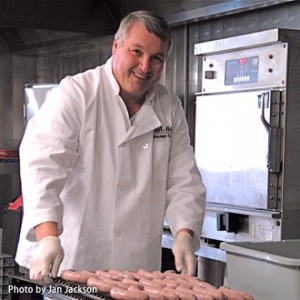 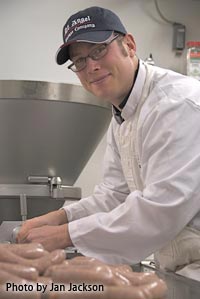 James Hoke makes sausage his family sells at event, their retail counter, on their web site and from their Mt. Angel Sausage Company Pub.

MT.ANGEL, Ore. – It is hard to think of Mt. Angel without a sausage company, but that was the case until sausage maker Jim Hoke came to town ten years ago. Now Hoke and his son James, not only make varieties of German, Dutch and Italian sausages, but they serve them seven days a week in their Mt. Angel Sausage Company Pub. What started as a sausage factory, a catering kitchen and a retail Web site is also now a Mt. Angel gathering place for locals and visitors.

“I found out I’m a sausage guy and I am where I want to be,” Hoke said of his Mt. Angel sausage business. “I believe there is an informal destiny or fate involved in the decisions we make and it sure played a part in getting me here.

It all started with the Klausens

“After the lease we had for 13 years expired, we closed our deli and frozen yogurt shop in South Salem. James wanted to start an event business, so we started selling mini donuts at Salem Saturday Market. A few weeks later while selling at the Carlton Fun Days, we met Dutch immigrants and sausage makers Tony and Nellie Klausen who wanted to sell their business. I bought the booth, their events and the recipes. It was one of the best investments I ever made.”

Hoke, one of five boys and three girls, was born and raised in Montana. His father was a gas plant operator; his mother was the town baker and a world-class candy maker.   Hoke started working in a grocery store sacking potatoes at the age of 9 and at 15, he was a journeyman meat cutter. At age19, he left home for a lucrative but nomadic life in the international offshore oil fields where he worked all over the Middle East and South East Asia. Though he absolutely loved it, spending more time with his family became more important.

A sausage company for Mt. Angel

“The first year in Mt. Angel I set my booth up in the alley behind the Koffee Konnection and we did well enough to buy the pool table the Koffee Connection wanted to put in for the kids,” Hoke said. “The next year we set up in the parking lot of what was then Mt. Angel Specialty Foods and that’s when I decided I wanted a brick-and-mortar place to do business. I bought Mt. Angel Specialty Foods and the first few years I worked out of the catering kitchen and did as many as 50 events and festivals a year.”
As more and more folks wanted to eat in as well as buy sausage to take home, Hoke developed the restaurant’s on-site meals. About 18 months ago, he started a serious remodel, dramatically expanded the menu and overhauled the staff. Today, he limits the festivals to about 28 big ones. Though the Restaurant and Pub is open seven days a week, the Hokes only make sausage on Mondays and Tuesdays. 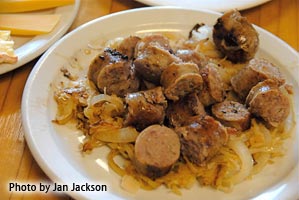 Pub fare at Mt. Angel Sausage Company, is served in a laid back friendly atmosphere.

“Tuesday mornings are the best times to watch the operation because that’s when we do the stuffing,” Hoke said. “However, folks need to let me know in advance if they want a tour because I don the white coat, scrub up and give the tour myself. I love drop ins for lunch or a beer and some conversation, but not for tours.

“The Klausens are retired now and spend half the year in Belize and the other half in Holland, but I still talk to them about once a year or when I can hunt them down. I also enjoy talking to the people who seem to find us through the German pipeline and from folks like former Portland Rhinelander chef/owner Horst Mager who took the time at the state fair to tell me my sausage is world class.

“Our business is all about family and it includes my wife Robin (yes, we’ve been called Bratman and Robin), son James and daughter Nikki and our restaurant manager Lennez who has put together a staff of great people that helps us run the place. We are also all about natural lean protein and spices and we use no chemicals or preservatives. When you have great products and good people around you life as a sausage dude is good.”

And a favorite recipe from the kitchens of Mt. Angel Sausage Company Pub:

In a medium saucepan cook the rice with water. Bring to a boil. Reduce heat and simmer covered until rice is just tender 35-40 minutes. Drain excess water. Meanwhile in a large saucepan, heat olive oil over moderate heat. Add onions, celery and carrots. Sauté until tender for about 5 minutes. Add potato, sausage and chicken broth along with the corn. Cook until potato is tender about 15 minutes. Stir in rice and remove from heat.

You can find out more about Mt. Angel Sausage Company at www.ropesausage.com.

Caption lead photo: Jim Hoke preparing a tray of sausages made in his Mt. Angel Sausage Company, gives tours of the operation with advance notice.