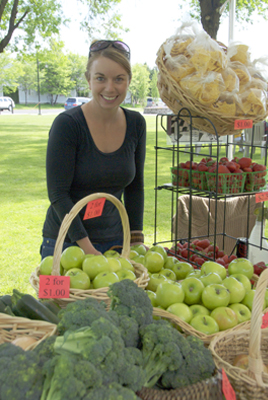 MADRAS, Ore. – If you’ve only seen Madras from U.S. Highway 97, you are missing an important city sitting in a circular high desert valley surrounded by beautiful lakes and rivers, snow capped mountains, fascinating ghost towns, fossil beds and farm lands. Once located in one of the most successful dry-farming areas in central Oregon, water from the Deschutes River now irrigates much of this lush Jefferson County farm land.

Madras is a jewell in the high desert. According to Oregon Department of Transportation estimates, 20,000 cars pass north and south through the city. The people in those cars would not only do themselves a favor by slowing down and staying awhile, but if it is a Saturday during harvest season, they should stop right down town at the Saturday Market in Sahalee Park. That’s where Patti the hat lady sits knitting, where people like Alice Saterlee are selling flowers and young Jerod Kasch (photo on the home page) is trying to keep his booth stocked with fresh Oregon grown berries to earn money for his school wrestling club. It’s also where you can buy the best barbequed ribs, biscuits and gravy, fresh fruits and pastries.

Sharing and Caring
“This market is a great place to be on a Saturday,” Ann Snyder, a market committee member and vendor who grows and sells her lamb, pork and goat meat every market day said. “People just wander through with coffee in hand, shopping and visiting as they go. We sit in the shade, visit with our customers and listen to live music.”

While vendors and shoppers traded money for goods, Nora Shapiro sat in the information booth spinning short fiber colored cotton. When a lady from Bend came with a spinning wheel she couldn’t get to work, Nora laid her spinning aside and took up the spinning wheel project.

“I love spinning and weaving, but I’m a teacher at heart,” Shapiro said about sharing her expertise. “I was 18 or 19 when I took my first weaving class. In those days it was an old woman’s craft and I was by far the youngest in the class. Weaving created an order in the universe for me and then when I couldn’t find the yarn I wanted, I learned to spin. I love it all from raising the animals, spinning, weaving, knitting and sewing and I love coming to the market and showing people how they could do it too. I believe people really want to connect with all the stuff in their world and I can show them how to do that.” 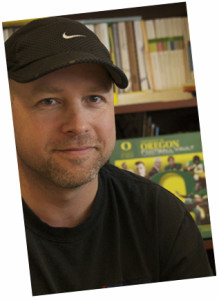 “When that money leaves town, it never comes back to Madras,” Wright said. “It is frustrating to all of us so it wasn’t hard to get together and come up with a plan. Now we check with each other before we buy outside the community. We have 39 business members so far and we organized only three months ago. We have 150 businesses here and our goal is to get 100 out of the 150.

Kent Wright, owner of Mail, Copies & More in Madras Oregon
Madras businessman Kent Wright, owner of Mail, Copies & More, founded the Madras Business Group to help keep Madras buying local.
“It is important to keep our money here so this community can prosper,” Wright said. “All we ask is that we get a chance to match the product, the price and the service and if we can, a multiplier effect kicks in. We are keeping the business group simple and straightforward so that we don’t have to have a bunch of meetings and it’s working.”

Wright, who moved to Madras in 1997, also volunteers as a firefighter, a youth group leader at his church, as president of the Lions Club and is a former soccer coach. He says part of his enthusiasm for the area has to do with the multitude of cultural outdoor activities within an hour from town.

“We are next door to Kahneeta, on the Warm Springs Indian Reservation, we have horseback riding, rock hounding, fossil beds, sky diving and fishing. Madras is a great place.” – Jan Jackson

A New Flag for Shaniko


Ed Johann – Legend In His Own Time