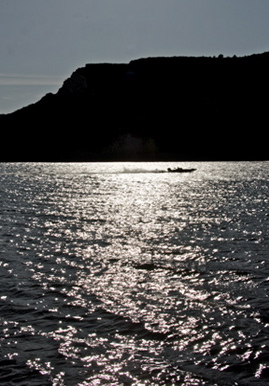 Madras, Ore. – I would like to think that if Billy Chinook were alive today, he would proud that the large and beautiful high desert reservoir in Central Oregon was named after him. Located in the scenic canyon country east of the Cascades range about eight miles southwest of Madras, the lake was created in 1964 by Round Butte Dam. It’s 72 miles of shoreline and surface area of 4,000 acres, and is surrounded by mostly public lands. Fed by the Metolius, the Deschutes and the Crooked Rivers, the lake is famous for abundant kokanee (a sockeye salmon of a dwarf variety that lives in landlocked lakes in western North America) and trophy-size bull trout (a member of the salmon family which can grow to more than 20 pounds in lake environments). The dam project generates approximately 800,000 megawatts electricity per year for residents in the Portland metropolitan area.

Billy Chinook – Indian Scout
Billy Chinook was a well known Wasco Indian scout from the Warm Springs region who traveled with explorer John Fremont in 1843. Most anglers fish Billy Chinook from boats launched at Cove Palisade State Park on the Crooked River arm or from ramps on the Deschutes. Both areas have extensively developed camping and recreational facilities that include RV hookups, picnic areas, running water, showers and a swimming beach.

One campers dream
Chuck Creswell, an avid fisherman who is developing a non-profit fishing camp in Salem for families with children who have life threatening conditions, prefers to fish the Metolius arm which is managed by the Confederated Tribes Warm Springs. “My favorite fishing spot is definitely the less populated Perry South Campground in the Deschutes National Forest, even though you have to have a tribal permit to fish it,” Creswell said. “It doesn’t have drinking water, but it does have picnic tables, fire rings and outhouses. For me, it has a serenity not available in the other two areas.”

How to get there
To reach Billy Chinook from Madras, you drive south on Hwy. 97. Near Culver, take the road west to Cove Palisades State Park. The route is well signed. The descent to the lake is about 700 ft. If you are coming from Sisters, follow Forest Rd 63.


A New Flag for Shaniko