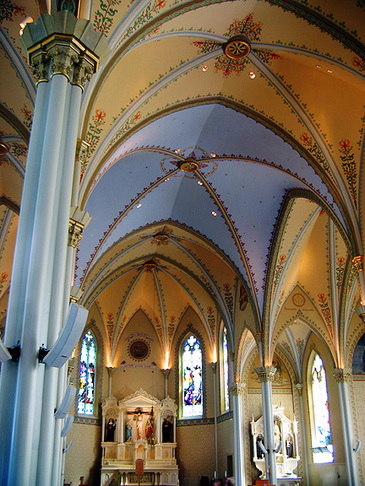 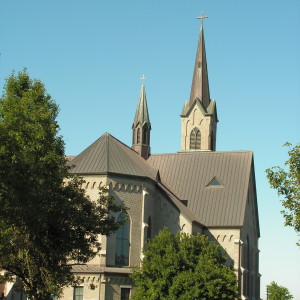 Like most churches in Europe built over the centuries, St. Mary Catholic Church was constructed by local craftsmen and laborers

MT.ANGEL, Ore. – The  soaring 200 foot steeple of the nearly 100-year old St. Mary Parish Church, is the first thing you see upon approaching Mt. Angel, Oregon. Located in the center of town, the buildings in the village seem to radiate from it, giving the town a sense of place and a charming ‘Old World’ feel.

The beauty of Gothic

The Roman Catholic Church bears “Gothic Revival” architectural styling reminiscent of the great Gothic churches of central Europe. High vaulted and ribbed ceilings, pointed arches, tall slender stained glass windows and ornate stenciling characterize the revival Gothic church. Mt. Angel’s early Germanic pioneers brought this type of architecture with them. The word ‘Gothic’ literally means German.
Like most churches in Europe built over the centuries, St. Mary Catholic Church was constructed by local craftsmen and laborers. Jerry Lauzon, the church’s sacristan and one of the people who loves talking about the beautiful church, never tires showing it off.
“The cement bricks were made on site using hand molds that made five bricks at a time and most of the furnishings were made here in town,” Lauzon tells visitors. “One of the most important features however, is its collection of 22 stained glass windows.

A treasure of stained glass windows

“The two windows flanking the tabernacle shrine in the apse (semicircular area) were made by the Royal Bavarian Glass Works of Munich, Germany while the two windows over the north and south portals in the transept (church wings) are the works of The Povey Brothers Glass Company founded in 1888 in Portland, Oregon. The remaining windows were made by the William Frey Glass Company of St. Louis, Missouri. Mr. Frey had immigrated to America from the Bohemian Forest of Germany, an area noted for outstanding glass works.

“The plastered walls are painted in a cascade of color and stenciled in minute detail.  St. Mary’s embodies the saying of Winston Churchill: “We shape our buildings, thereafter they shape us.”

There was excitement in the air on June 12, 1910 when local carpenters, brick layers and other volunteers gifted in various trades gathered to lay the cornerstone of St. Mary Church. On June 30, 1912 when the finished church was blessed by Archbishop Alexander Christie, it was a day of liturgical and festive celebrations. However on March 25, 1993, a violent earthquake of 5.7 magnitude on the Richter scale shook the Mt. Angel area. Although none of the stained glass windows imploded, the church suffered structural damage.

“During the ensuing months, parishioners became quite used to worshiping in unusual settings while the building was undergoing repairs,” Lauzon said. “We found ourselves worshiping in Mt. Angel’s Oktoberfest building where the stage became the setting for the altar and the Oktoberfest benches formed pews. On Dec. 2, 1995 (two months after the quake restoration work began), the renovated church was once again solemnly dedicated.

Like most churches in Europe built over the centuries, St. Mary Catholic Church was constructed by local craftsmen and laborers

Today, St. Mary’s welcomes parishioners and visitors each weekend for the four scheduled Masses, three in English and one in Spanish. The parish now boasts 1,250 households and 3,896 individual persons. Father Philip Waibel, OSB, pastor for the last seven and half years, continues the 128-year old tradition of the ministry of the monks and priests of Mount Angel Abbey to this parish.
“It is an honor to lead this community of believers in our faith journey and out-reach to the less fortunate,” Father Waibel said. “There isn’t a more generous and faith-filled community.”

The emphasis on prayerful, spiritual, and beautiful liturgical services has long been a tradition at St. Mary’s.  Father Philip often remarks, “Half of my work, both in teaching and in worship is done by the building itself: lifting the mind and heart to God.”
During the annual Oktoberfest celebrations, tens of thousands of visitors come to visit the building and to hear concerts in the church.

In the true spirit of Benedictine spirituality and hospitality, Father Philip and the St. Mary Parish are actively planning  several public events and liturgical celebrations to honor the 100th anniversary of the laying of the cornerstone. To find out how and when to visit or to see a full panoramic view of St. Mary’s Parish, St. Mary’s Cathedral and Mount Angel Abbey, go online to www.stmarymtangel.organd take the virtual tour.