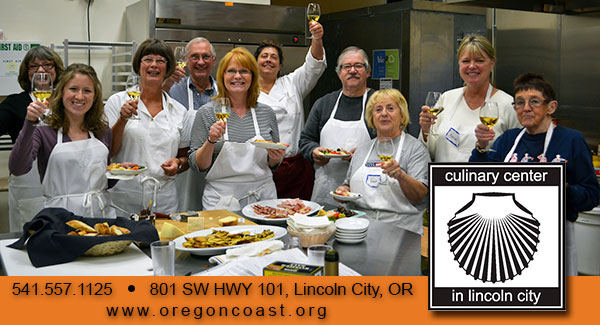 LINCOLN CITY, Ore. – Things are cooking at city hall. Really cooking. Located on the fourth floor, in space
originallyoccupied by an ocean view restaurant, is a popular culinary center where you sign up for a workshop to learn how to prepare and cook things fresh and wonderful and at the end of the class you sit down with the chef and eat it. Chef Sharon Wiest, who directs the center full time for the Lincoln City Visitor and Convention Bureau, offers demonstration classes where you can sit back, watch and relax, as well as hands-on workshops where under her direction you dive right in and do it yourself. The program is popular with residents and visitors alike.

Fresh arm to table menus
“I limit the demonstration classes to 20 and the hands-on ones to eight to ten people,” Wiest said. “It is so easy to eat farm-to-table here and the other chefs are good to share their sources. We let each other in on who has fish or produce coming in or let everyone know who has found a guy that has eggs, duck eggs or quail eggs. I customize each menu by what’s available about two weeks prior to each session to see what’s out there.”

The center started in March of 2007, as a public-private partnership between the Lincoln City Visitor and Convention Bureau and Chef Rob Pounding, owner of the Blackfish Café and Rockfish Bakery in Lincoln City. Rob’s long time dream was to have a place to showcase Pacific Northwest locally grown, seasonally fresh and whole or minimally processed food which would give special attention to strengthening the connections between farmers, fishermen and other producers as well as the consumer. By September 2008, the Lincoln City VCB was able to hire former Country Club Chef from Cincinnati Sharon Wiest to direct it full time.

Fun in the kitchen
Growing fresh herbs at the Culinary Center in LIncoln City
Harvesting fresh herbs growing inside to shelter them from the harsh sea air, are from left Culinary Center volunteer Delane Englestad and class participant Jackie Bloom; Photo by Jan Jackson
“The classes are popular with Elder Hostel and other small tour groups, individual people who have come to stay a few days at the coast, as well as specialized groups like the OLCC who come here to conduct their server classes,” Wiest said.

“I cooked as a kid and remember watching programs like the Frugal Gourmet on television. Other than being a stickler for cooking safety and the understanding that baking is a very exact science, I want people to have fun in the kitchen. I’m organized to the extreme, but there are tasting spoons everywhere. Two of my rules are 1) You will know when it’s good by tasting it and 2) You cook it until it’s done.”

Preheat oven to 350 degrees
Combine sugars, 2 cups flour, butter and cinnamon. Rub together until the fat is thoroughly blended in and the mixture is crumbly. (May also be done in a food processor.)
Place well-drained berries in bottom of 8” X 8” baking dish and toss with remaining ¼ cup flour. Sprinkle crumb mixture evenly over fruit.
Bake in 350 degree oven for 35 – 40 minutes or until golden
– Jan Jackson © 2010